Mockingjay and Costume Design: Real or not Real?

In terms of costume design, first two Hunger Games movies never quite lived up to my expectations. It wasn't that the costumes were bad -- far from it -- but they seemed far too homogeneous. Given free rein to create the most outlandish designs imaginable, the Capitol fashjons were disappointingly conservative and homogeneous.

Mockingjay, Part 1 was another matter entirely. With no Hunger Games, Capitol makeovers, or District 12, the story focused on Panem's growing revolution, shown through the eyes of the propaganda war between the Capitol and District 13. Before the film even came out, YouTube propaganda clips began to illustrate the calculated nature of President Snow's public image. 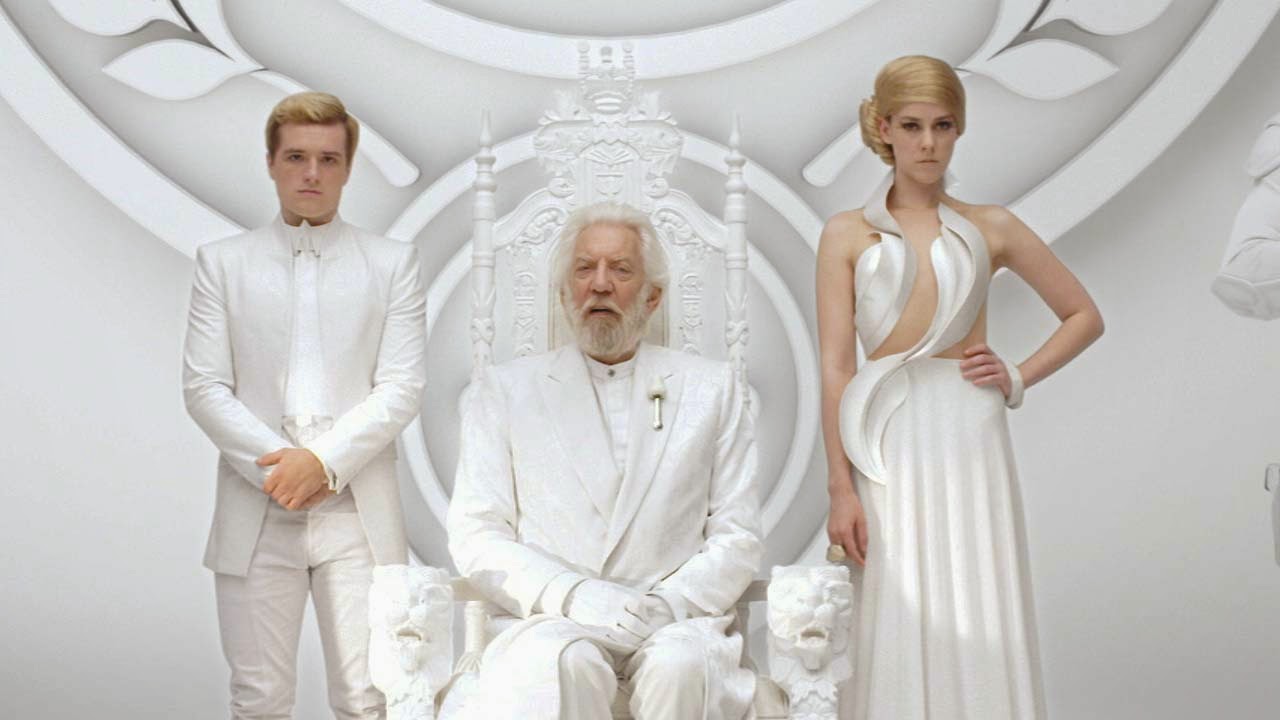 Mockingjay flipped the cliché of dark and light, with the villainous President Snow surrounding himself with pure white to match his signature white roses. His brainwashed prisoners Peeta (dressed in an uncharacteristically stiff suit and a painful-looking white paper collar) and Johanna presented a united front, fitting in with Snow's clean, luxurious aesthetic. Meanwhile Katniss, daughter of coal miners, wears black body armour and fatigues.

In the earlier films, this kind of contrast was meant to highlight Katniss's salt-of-the-earth nature with Snow's obsessively controlled image, but this time it's more complex. Katniss may look more practical and less "styled" than Snow and his entourage, but that's because her District 13 stylists decided this was the best way to market her to the rebels. Her Mockingjay armor (in real life, modeled off a Japanese archery breastplate) was designed for her by Cinna, and continues the asymmetrical theme of previous outfits she wore to public appearances. 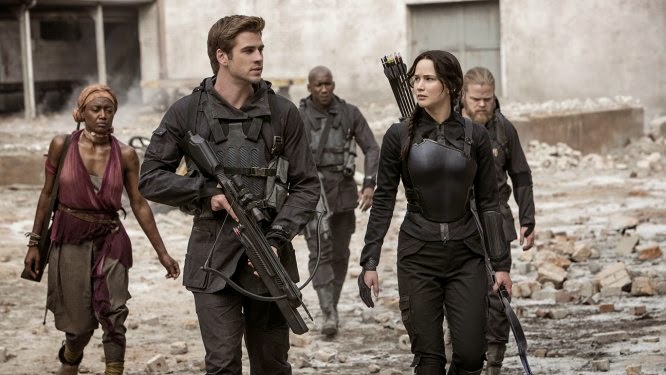 Each Hunger Games film has a different costume designer, which I'm beginning to think was a very smart idea. I found The Hunger Games (Judianna Makovsky) to be overly simplistic, but the filmmakers probably didn't want to take too many risks when first introducing the setting. The costumes of Catching Fire (Trish Summerville) were closer to what I'd hoped for, but they still had to adhere to the visual themes set up by the first film. But as Mockingjay branches out into the wider world of Panem, more avenues open up for interesting work by the new costume designers Kurt and Bart, who previously worked on the wonderful Stoker. 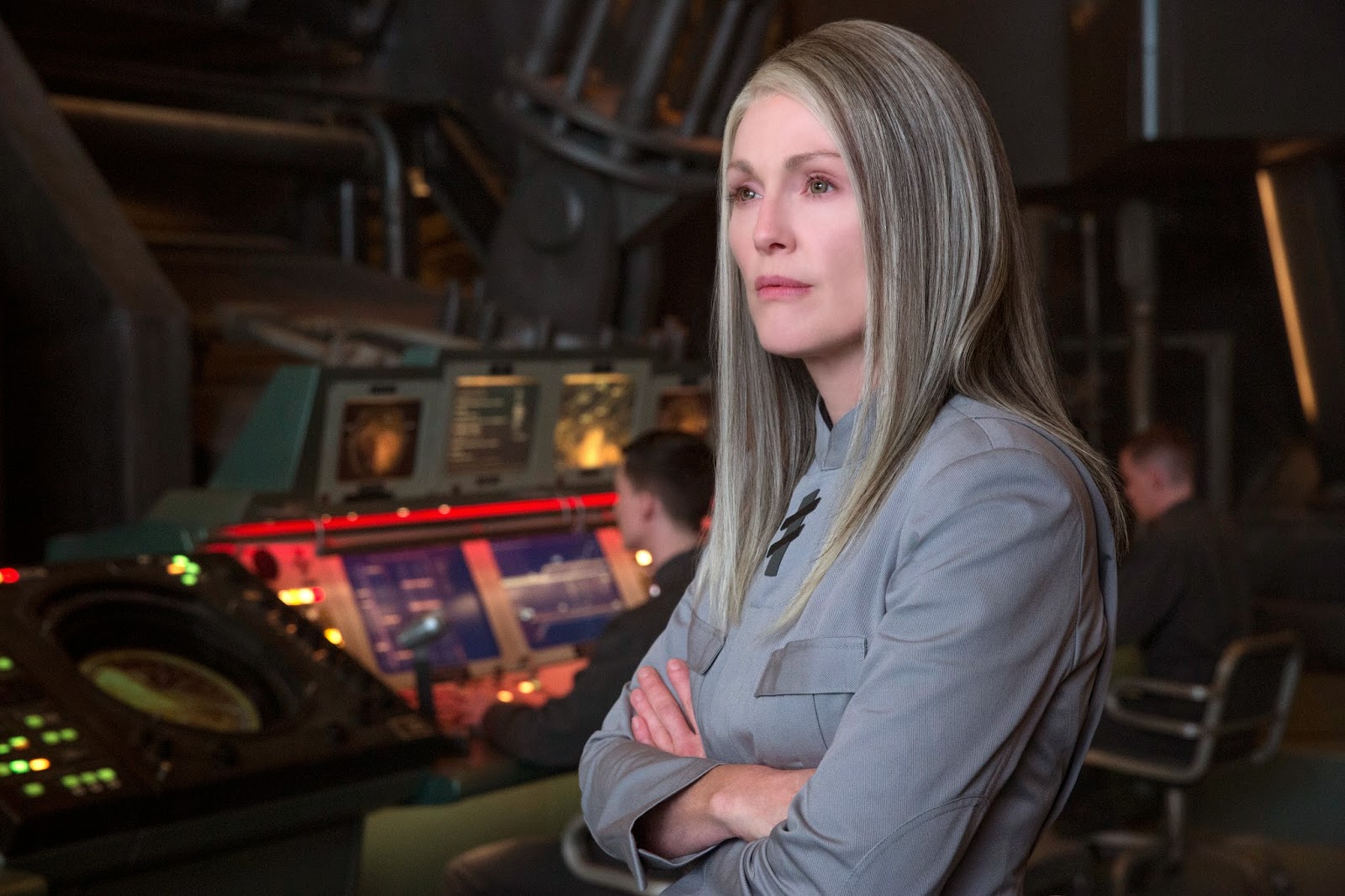 Visually, District 13 felt a lot more coherent than the Capitol ever did. My issue with Capitol fashion is that while the costumes were gorgeous, they all had an oddly similar aesthetic -- something that didn't make sense when you consider the furious competition between stylists. District 13, on the other hand, has a perfect excuse for everyone to look the same: It's a military bunker where citizens are given food, clothing and shelter by the state, and where luxury items are rationed. The end result is a utilitarian grey uniform that reflects the stern practicality of President Coin's leadership. 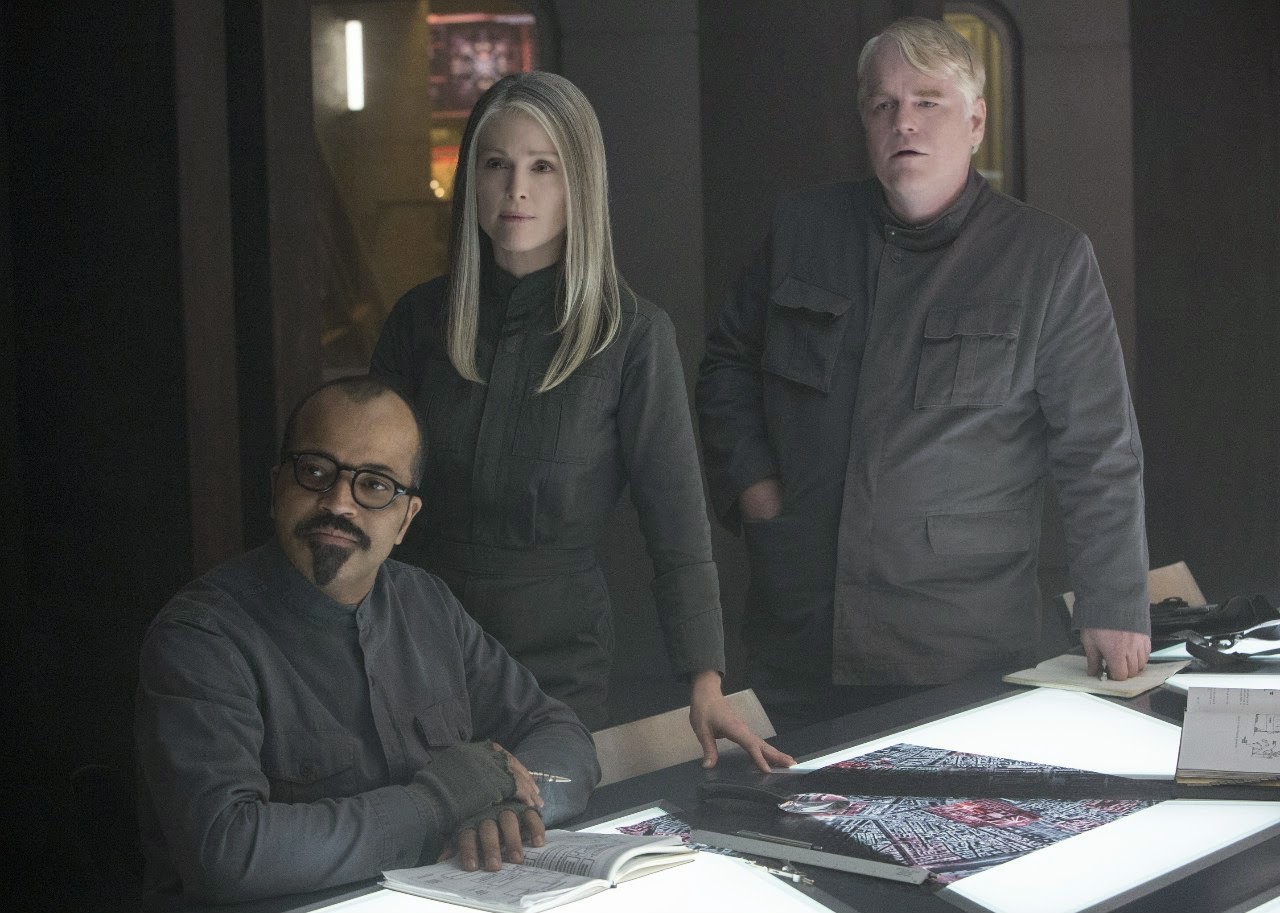 Uniforms and bland, drab costumes are an easy way to illustrate a certain type of dystopian setting. Given the right encouragement and/or legal obligation, most people probably would agree to wear the same uniform every day, especially if they think it's for the greater good. However, there's always someone who can't bear to look the same as everyone else, which is why I'm so fond of Effie Trinket's new costumes.

Dragged away from her life in the Capitol, Effie quickly begins to modify her District 13 fatigues until she's got a collection of grey turbans and capes. Even the way she wears her shirt is different from the neat and practical appearance of characters like Beetee and Plutarch. She simply cannot bear to not look her best. 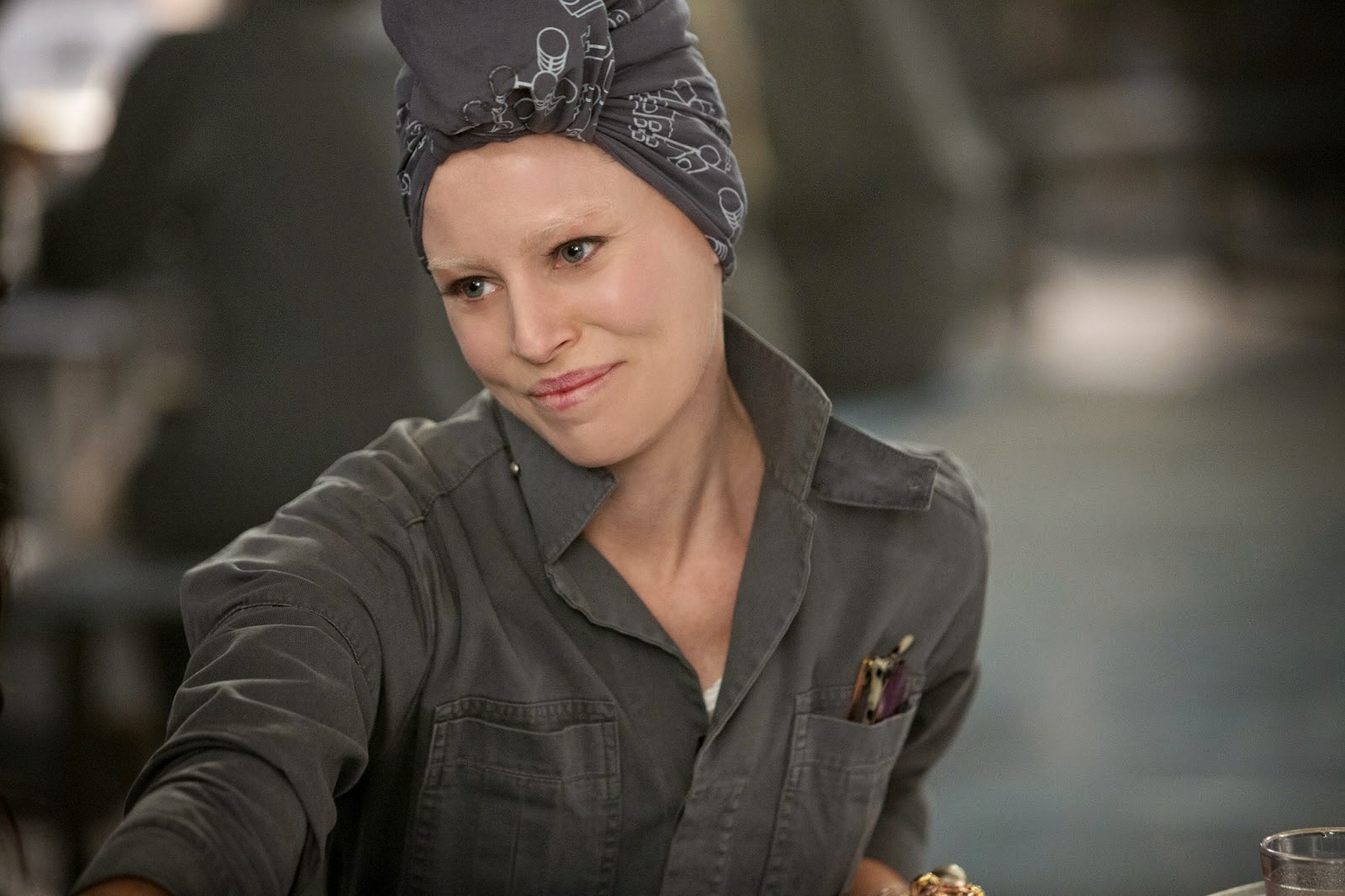 Between Snow, Katniss, and District 13, we have a white/black/grey color scheme that contrasts beautifully with the rainbow of luxurious costumes we saw in the first two movies -- and each one of these design themes has a solid foundation in the film's worldbuilding. Katniss is dressed in black by Plutarch and Effie, in armor that was designed by Cinna to make her look like the perfect Mockinjay. President Snow is dressed in pure white to offset the filth of the Districts, and the people of District 13 are proud to give up their individuality in favor of wearing the uniform of the revolution, all working hard for what they believe to be a better tomorrow. 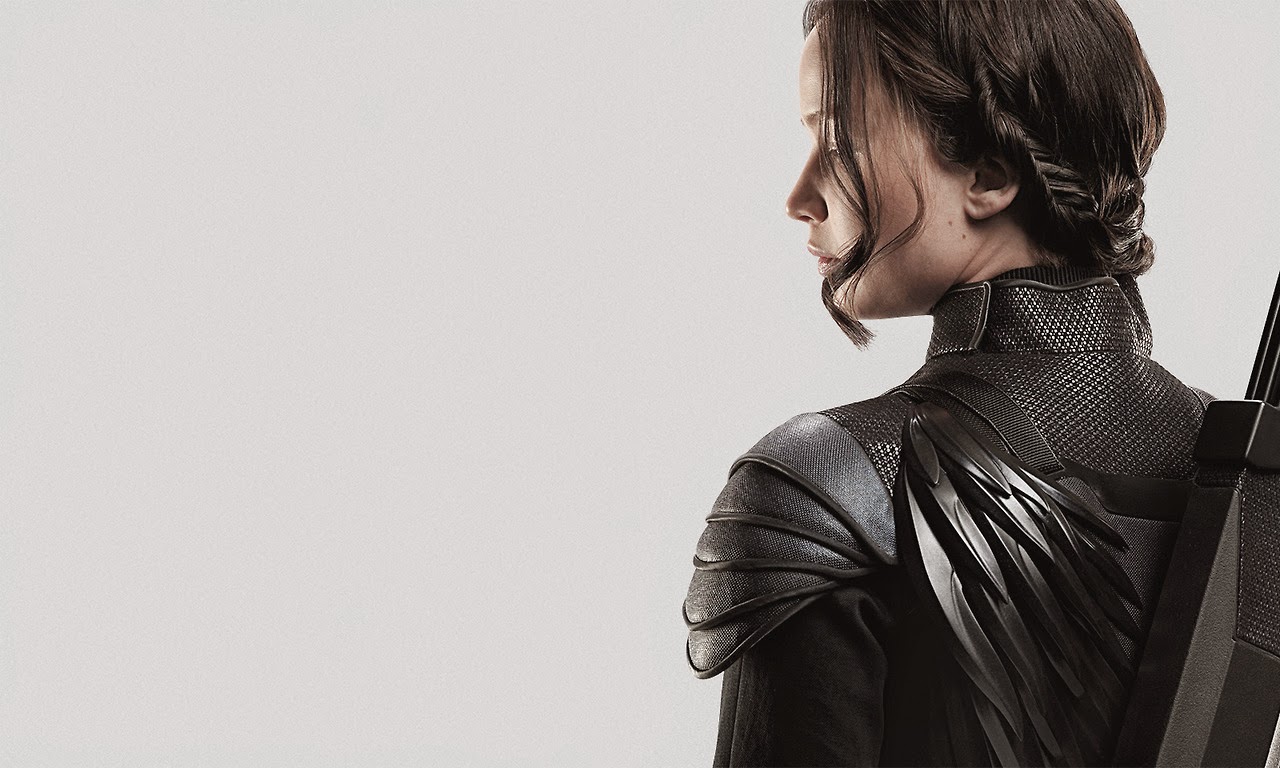 For me, the most satisfying aspect of Mockingjay's costumes was the constant theme of "real or not real." The first two movies were already obsessed with authenticity (Katniss and Peeta faking their relationship for the cameras; the sinister glamour of the Capitol's propaganda machine), but Mockingjay upped its game.

Along with Katniss, we begin to realize that nothing is "real." When Katniss sings the Hanging Tree song, that brief moment of genuine emotion is recorded, remixed, and broadcast to budding revolutionaries out in the Districts. Her image as the Mockingjay was designed by Cinna and propped up by clever camera work. Even the goal-oriented practicality of District 13 is arguably the result of propaganda. And so, while I love the costumes of Mockingjay in their own right, their greatest strength is their ability to make the audience think about why characters wear what they do. Instead of just being beautiful or helping build characterization, Mockingjay's costumes are a central aspect of the film's worldbuilding, and constantly demand our attention.