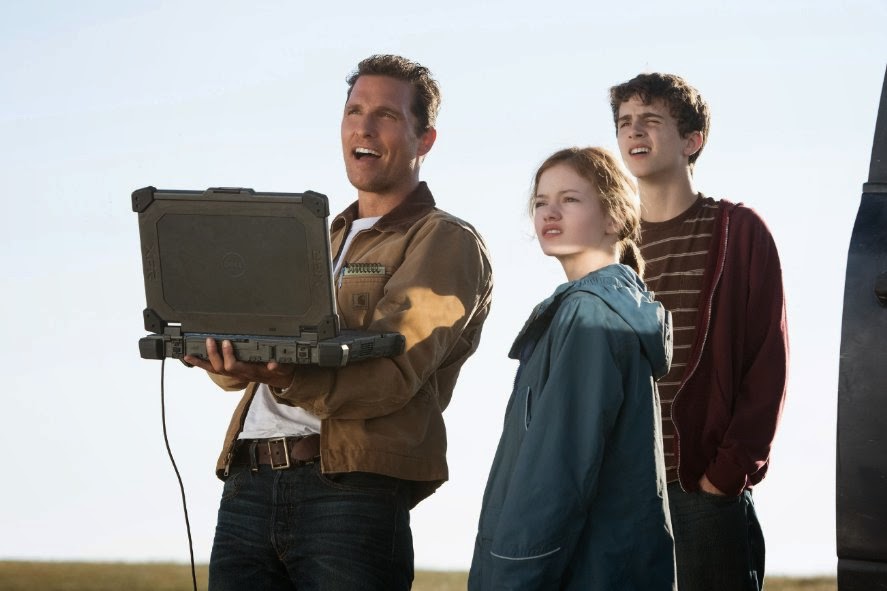 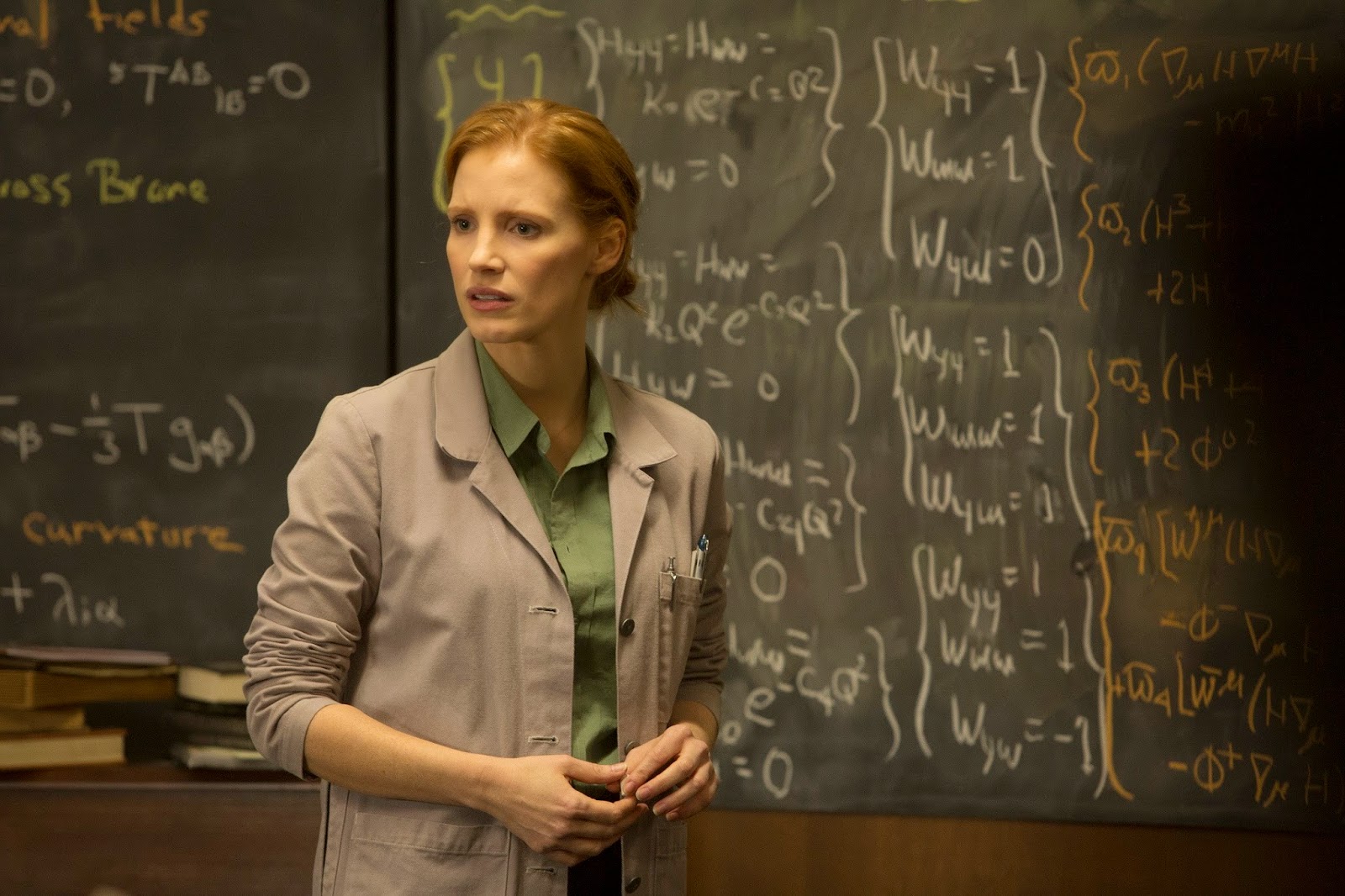 Decades in the future, the characters on Earth continue to wear clothes that look nondescript in the context of present-day fashions. We see Murph in her practical, neutral-toned outfits both at work and when visiting her brother at the farm. Judging by the clothes worn by Murph and her peers, fashion has stopped evolving altogether.

As someone who follows fashion, I'm certain this level of sartorial stagnation could never happen in real life. Even within a dying civilization where fewer new clothes are commercially available, fashions would continue to change over time. But I understand why Christopher Nolan and his costume designer made this decision, because it grounds the film in a sense of reality -- or rather, what we think of as reality in 2014. The other option would be to dress Jessica Chastain in futuristic outfits to illustrate the passage of time, which would clash with Nolan's desire to distance himself from the popular visual tropes of the Hollywood sci-fi genre.

When we see Murph wearing nondescript shirts and jackets, we only think of the passage of time in relation to to her age and Cooper's journey, not in the general sense of what year it is for the rest of the world. We already know the film is set in the future, so there's no point in introducing the costume equivalent of a flying car. 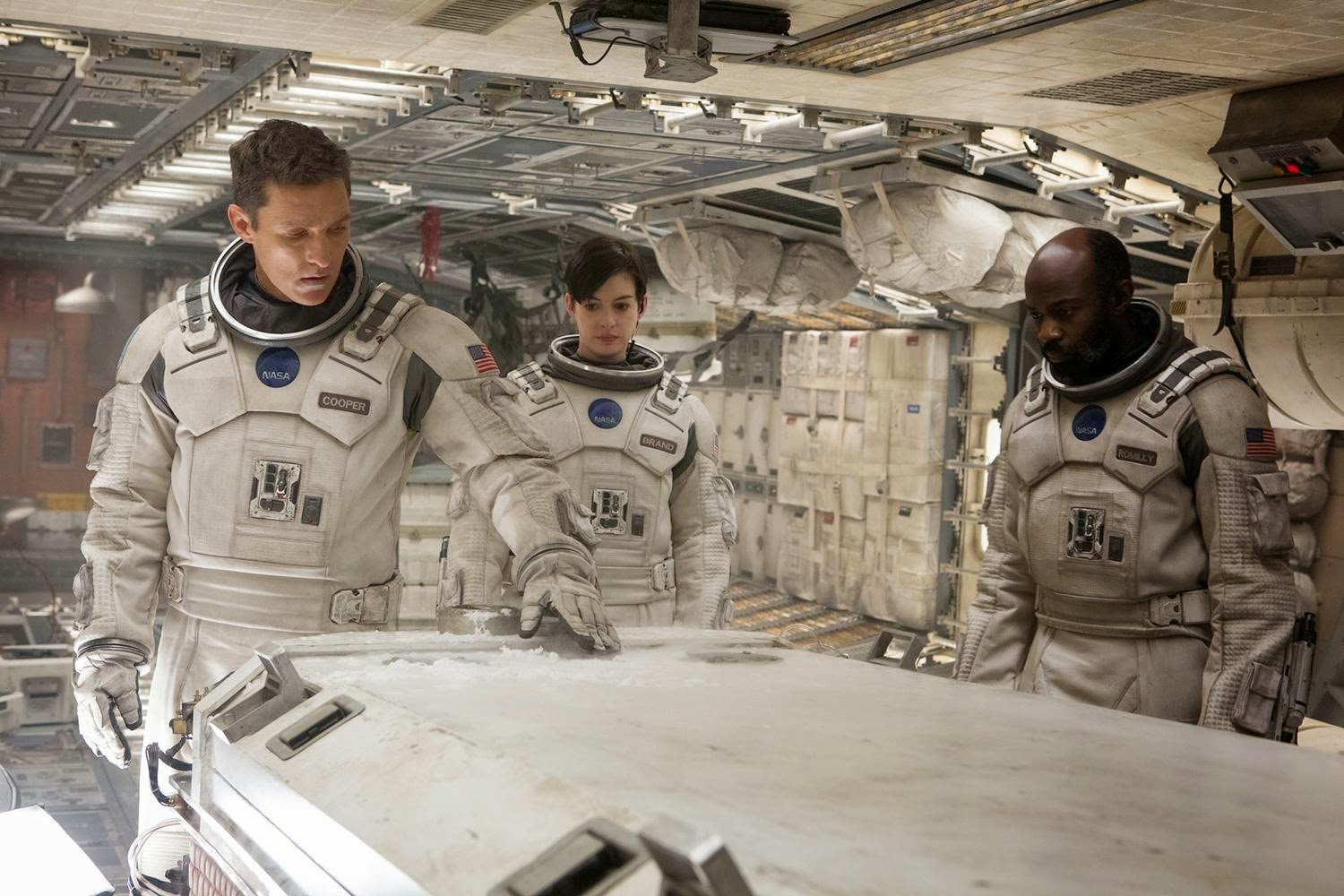 The space suits are the only costumes that look like "costumes" in this film, so they're the only ones that really get discussed in promotional interviews. The earthbound costumes are designed to be absorbed passively without any kind of conscious thought, rather than reminding the audience that they're watching a work of fiction.

In this interview, Interstellar costume designer Mary Zophres says, “My first, gut instinct was that you should not anticipate what the future is going to look like. In fact, there is no attention paid to sartorial aspects at all. It’s unimportant.” She goes on to say that the space suits were meant to look like they'd been cobbled together from spare parts. Since most viewers' personal image of a space suit is still based on the astronauts of the late 20th century, that's what they went for in Interstellar. Any additions or changes were for purely practical purposes. 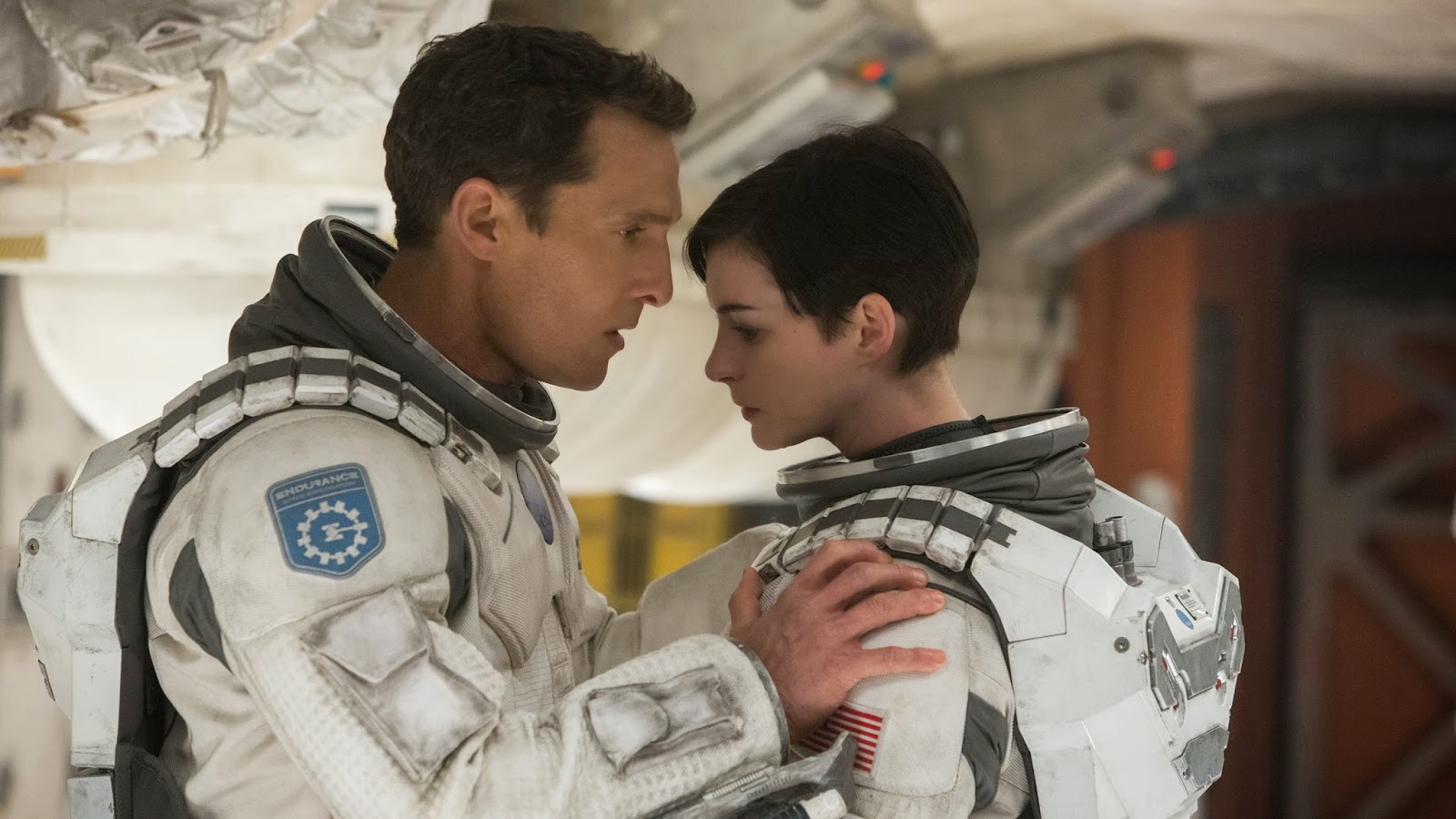 Costuming is always important to the way we consume a movie, but it's particularly important to Christopher Nolan's work as a writer and director of science fiction blockbusters. All of his best-known films are out-and-out fantasy (The Dark Knight, Inception, The Prestige), but their costumes and set design are intended to add a veneer of realism.

Nolan movies are treated with an unusual amount of respect compared to other sci-fi and fantasy blockbusters, and I'm pretty sure his costume design choices are a major contributing factor to this attitude. With the unavoidable exception of Batman, all of his characters are dressed to look as normal and everyday as humanly possible, which distracts us from the fantastical concepts behind each movie. In Inception (perhaps my favourite costume design film of all time) Nolan is telling a story of pure fantasy, but it's illustrated in the visual language of a real-world drama.

Dreams are depicted as buildings and hotel rooms full of everyday humans, and the only fantasy elements are the stretching dimensions and timescales of the dream world. Even those are introduced to us by an architect who carefully explains the situation by scribbling a diagram on a piece of paper -- which, incidentally, is also how Nolan explains wormhole travel in Interstellar.

Because most of Inception takes place in this realistic urban landscape, and because all of the characters are dressed in staid, businesslike clothes, it feels more like a corporate espionage thriller than a successor to the worlds depicted in movies like Dark City, Paprika and The Matrix. 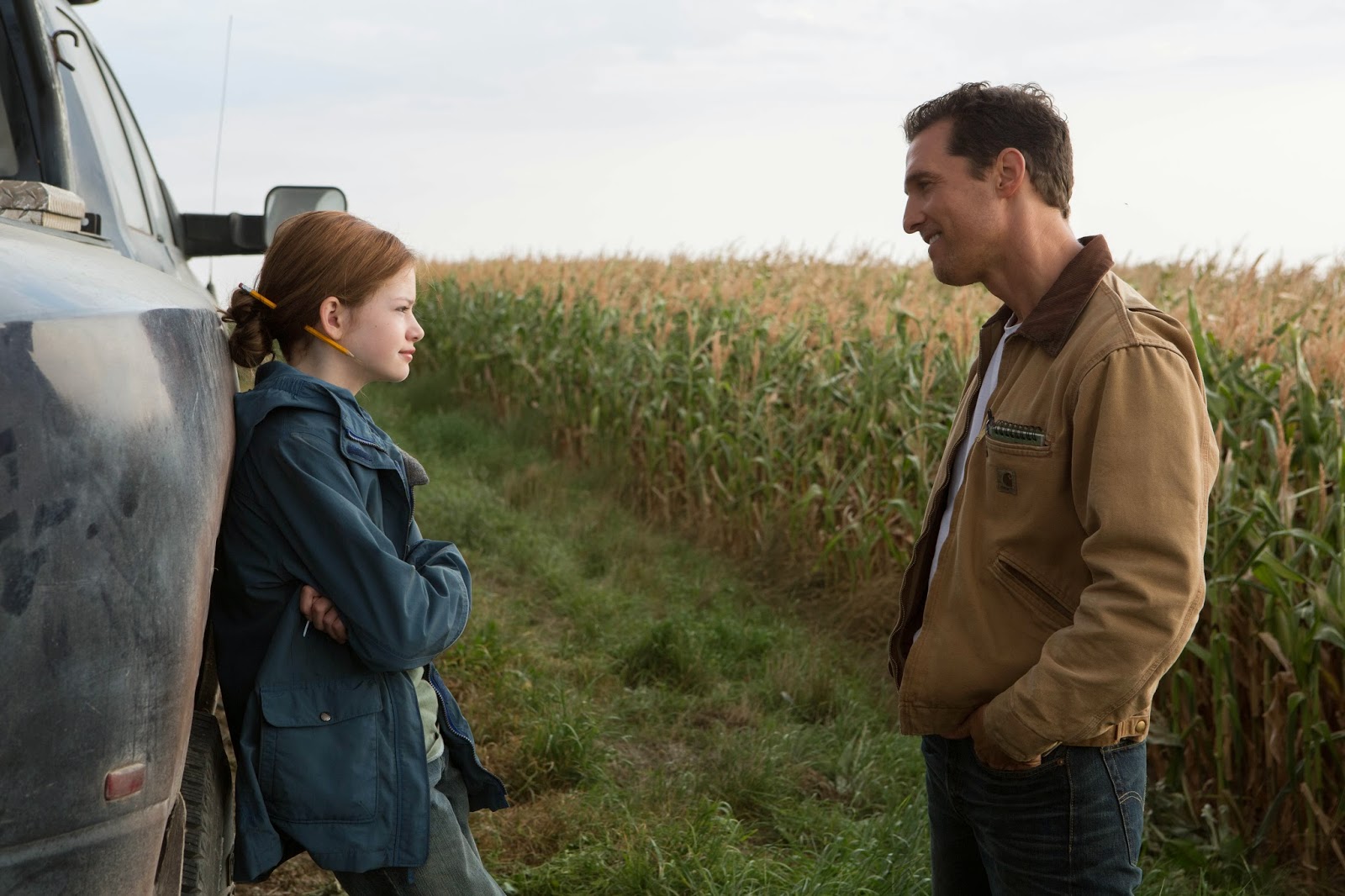 In the case of Interstellar, we're watching a movie that melds sci-fi ideas about relativity, apocalyptic climate change (more or less), and space travel. But we're also watching a Hollywood fairytale where NASA selects an American everyman farmer dude to lead a world-saving space mission, where five-dimensional beings help him transmit Morse Code messages to his daughter through time and space. Humanity is saved by a combination of the power of love and faith, and a message sent via books falling off a shelf and the ticking of a wristwatch.

As a viewer, this combination of hard sci-fi and nonsensical Hollywood fantasy requires a herculean feat of suspending one's disbelief. We need all the serious and "realistic" trappings we can get. Hence why Interstellar was marketed with Google-sponsored lesson plans and interviews with the film's astrophysicist, and why Nolan spent so much time on the ground-level worldbuilding elements of Coop's farm, the NASA labs, and the overall aesthetic of Earth scenes taking place in a contemporary setting. 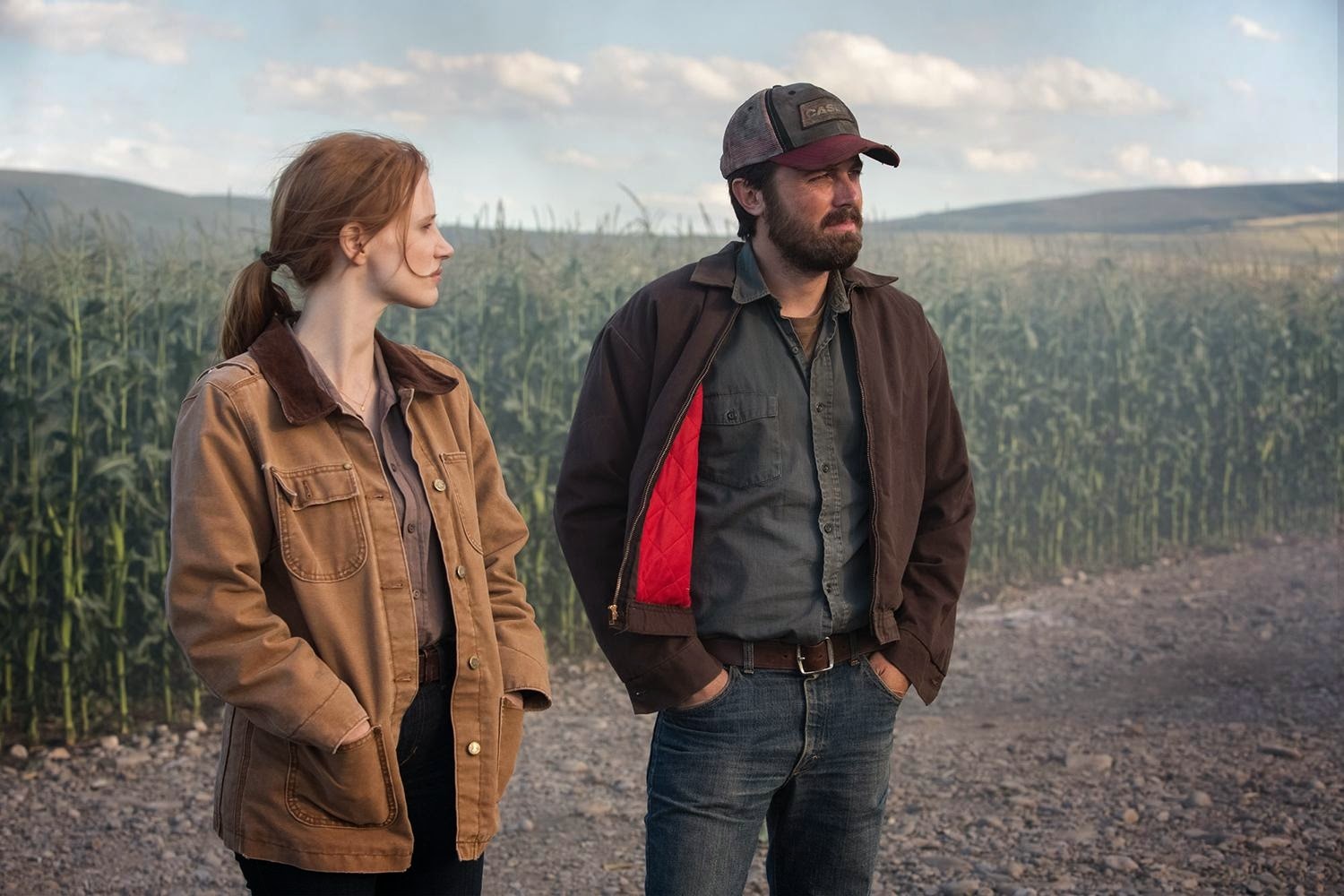 I usually tend to write about costume design from a characterization standpoint, but characterization is rarely an important aspect of a Nolan film. In Interstellar, the most personal costuming detail is Cooper's jacket -- which is later copied by Murphy as an adult, as she wears a jacket that looks very nearly identical to her father's. In amongst a cast of characters with no individual style whatsoever, this is a beautiful little personal touch; a subtle sign that Murph hasn't abandoned her father's memory quite as thoroughly as she likes to think.