Ah, the second episode. The one where the shine begins to wear off the frenetic energy of the pilot’s introductory scenes, and we must get down to the dirty work of establishing a believable character dynamic. The one where they spent all their budget on Samuel L. Jackson, so 90% of the story has to take place inside the plane. The one where Clark Gregg wears a really nice suit. 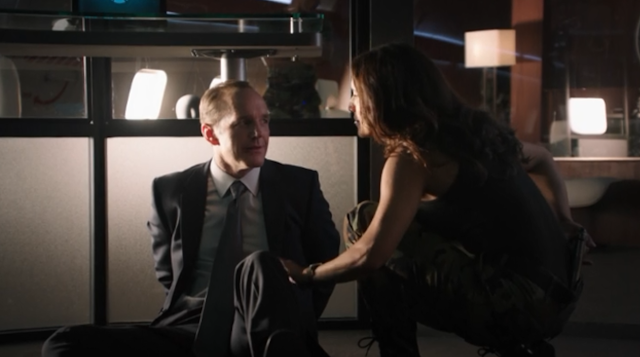 I already suspect that Coulson's superpower is removing skeeviness from situations that I'd ordinarily find stupid or gross. In this episode it was the old ~seductive latina~ thing, merged with the ever-popular "evil ex-girlfriend" trope. The only reason they got away with this is because it made sense within the narrative, and the Camilla Reyes/Agent Coulson interactions were just... really good, basically. The hot ex-girlfriend is a staple of episodic TV, because it's an easy way to introduce a single-use love interest without the hassle of building up a new relationship. If she's attacked to a manly hero dude, then she's usually there to reinforce his hetero cred and inject some romance into his character arc. If she's the ex-girlfriend of an unappealing or socially maladjusted male character, then she's a hilarious punchline.

The only show that springs to mind as being good at this is Starsky & Hutch, because it was the 1970s and everyone was dating like five people at once. Bizarrely, I get way fewer douchebag vibes from Starsky & Hutch than most mainstream cop/adventure shows airing in the 21st century. 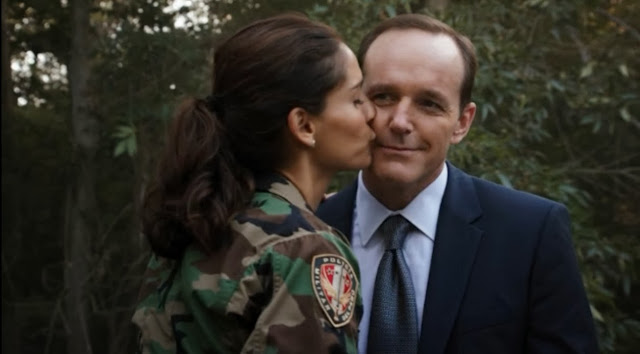 I found it quite easy to buy into the fact that Coulson has a history with Camilla Reyes. Not because Clark Gregg is Dreamboat #1 and therefore prime Peruvian secret agent affair material, but because of the characterisation points I mentioned in last week's review. Phil Coulson's defining traits are all tied into his kindness and reliability. He is nice, sensible, and respectful. In other words, he's the ideal character for a casual ex-girlfriend storyline. He obviously doesn't have time for a relationship, he's pragmatic and mature enough to have short-term flings with no hard feelings afterwards, and when we get to the actual ex-girlfriend episode itself... Coulson's not gonna wind up looking like a douchebag. 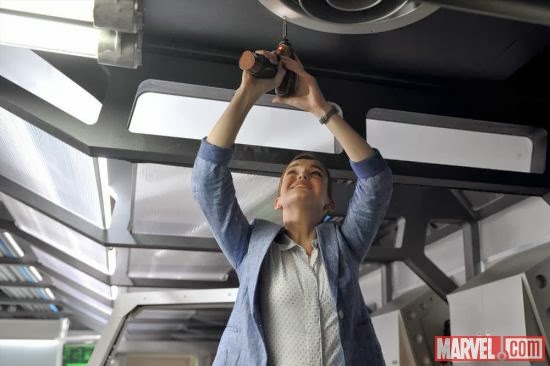 The most noticeable thing in this episode was just how simple everything was. I'm getting the impression that Agents of SHIELD is aiming to be child-friendly, but unfortunately this is translating into the character exposition being kinda patronising. The main purpose of this episode was team-building, but they didn't need to have Coulson literally narrating his team's developing relationship when we could see it happening onscreen. Show, don't tell! Jeez. Avatar: The Last Airbender is suitable for eight-year-olds, and still contains some of the most sensitive and interesting characterisation I've seen on TV. If they can do it, so can SHIELD. Not to mention the fact that plenty of little kids watch Marvel movies like Iron Man and The Avengers, which are full of adult concepts and complex relationships between the main characters. 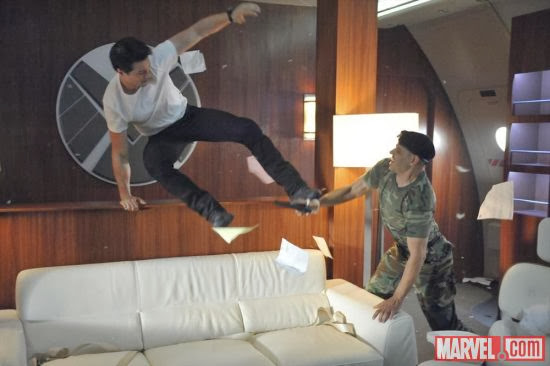 I'm really, really enjoying every appearance from Fitz and Simmons, but Ward is definitely still the weak link for me. Most of the team are still pretty two-dimensional, but that's OK. Coulson is good enough to keep the show ticking over until we get some more character development, and it's only episode 2. Unfortunately, dedicating this much screentime to Ward is not helping the situation. He's just another well-meaning white male soldier character in his late twenties, and he's really too banal to provide much of a foil to Skye's stick-it-to-the-man outsider attitude. I'd be more into Ward if he was gay, or explicitly very conservative/Republican/pro-surveillance (as a counterpoint to Skye's anti-government streak, and Coulson's benevolence), or even if he was just more of an asshole. But as it stands, I'm not watching SHIELD for another vaguely angsty young white male hero: we have the rest of the Marvel universe for that. 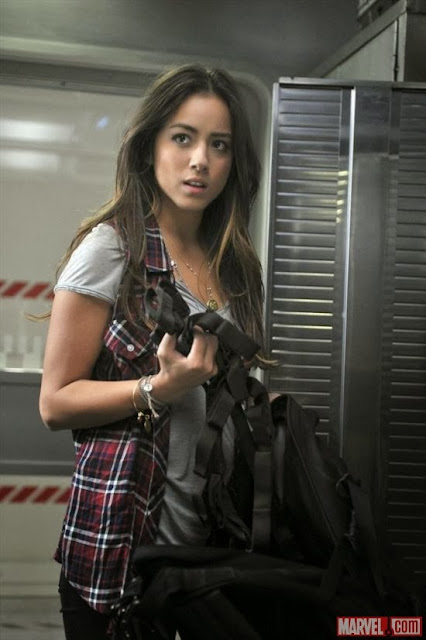 Aside from FitzSimmons (who I would happily see remain in their science-BFFs holding pattern ad infinitum), I'm most impressed by Skye. Not because I find her particularly likeable, but because her characterisation is by far the most solid in the team. Rather than being the outsider/audience-viewpoint character she was in the pilot episode, she now seems very... young. Which is kind of tricky to define, because TV tends to divide characters into either teenagers (Teen Wolf) or adults (Torchwood; X-Files) without much middle ground. And it's often very difficult to tell just how old the "adults" are meant to be, because any character between the age of 17 and 27 can potentially be played by a 25-year-old actor.

Even though Skye, Ward, and FitzSimmons all look about the same age, I think Skye is meant to be about 19 or 20. College-age, anyway. Whereas Ward is a military professional in his late 20s, FitzSimmons are both old enough to hold multiple PhDs, and May and Coulson are both around 50. Skye may be a brat, but she's brattish in a way that makes sense. 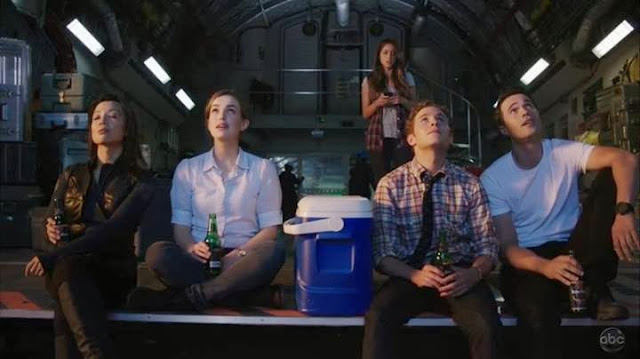 I loved the maguffinish nature of the maguffin. VERY X-Filesl. Nonspecific alien bomb threat! Gamma radiation! Science things! Who cares, as long as it all ends with everyone drinking Friendship Beer and watching a rocket launch. However, I did have a problem with the whole jock vs nerd schtick, which is the only thing I've seriously disliked about SHIELD so far. Maurissa Tancharoen and Jed Whedon are awesome, and I thought they were above writing well-trod cliches like an irritable jock character yelling "TELL IT TO ME IN REAL ENGLISH!" while a dorky scientist spouts technobabble and waves his arms around. There's a fine line between affectionate parody and just playing into old stereotypes, and somewhere in between the first two episodes, they crossed it. Here's hoping it's a one-off incident. 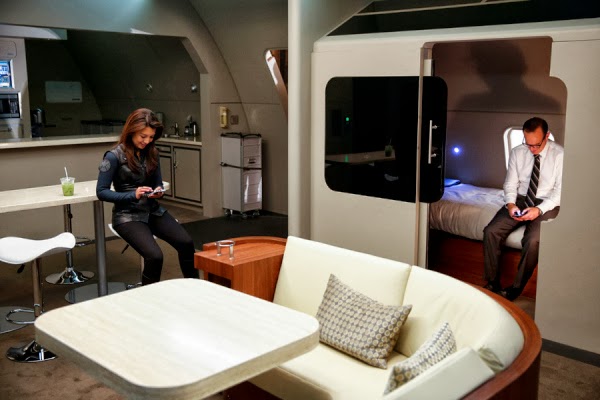