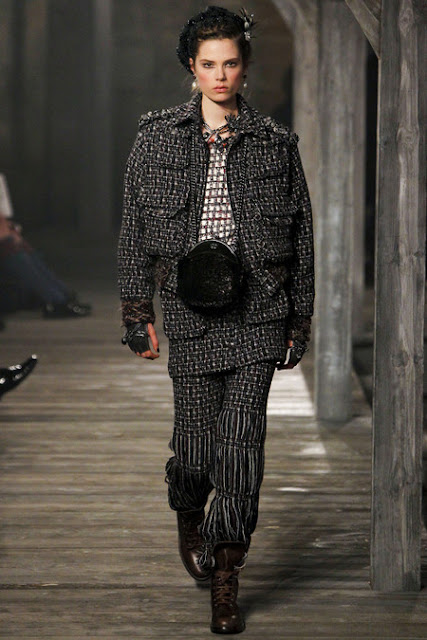 Lagerfeld's inspiration was a combination of Scottish history (specifically Mary Queen of Scots, who was born at Linlithgow castle) and Chanel heritage. Coco Chanel herself had close ties to Scotland, as she often stayed at the Scottish home of her lover the Duke of Westminster, and learned much about tweed and knitwear from the local clothing manufacturers. In fact, many of her masculine-styled suits were inspired by clothes she saw while on hunting parties in Scotland. The result of these two very different Scottish influences was a show mixing 16th century styles (MY FAVE; don't get me started on my love of pantaloons) and more typical (but still exquisite) knitwear and tweed outfits. 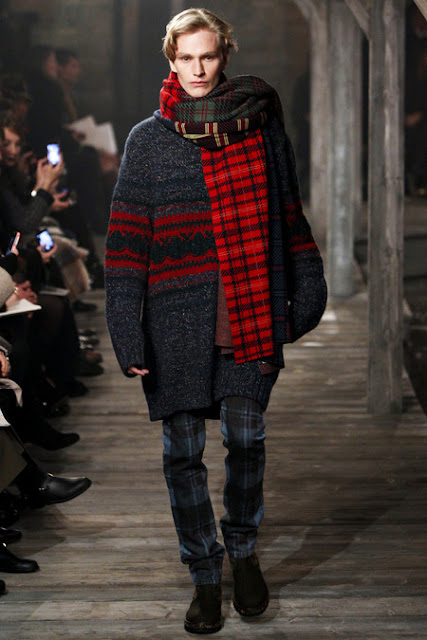 The reason for the unusual location this season was not due to a Lagerfeldian whim, for all that he embraced the Scottish theme. Over the past few years, Chanel has been producing collections honouring each of its offshoot workshops in turn. This year it's Scotland's Barrie Knitwear, which has been working with Chanel for decades but was only recently acquired by them (saving the company from liquidation, I believe). 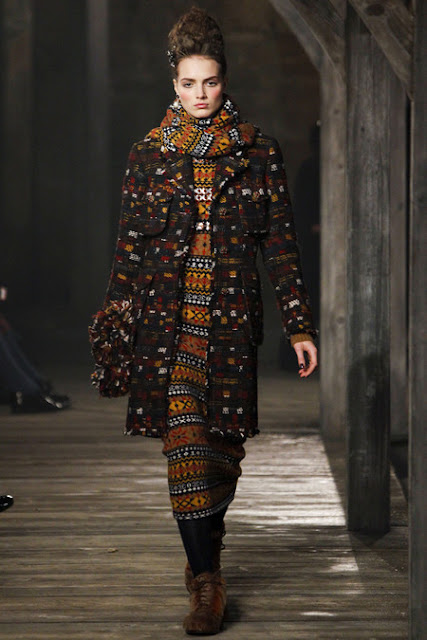 I loved the warmth and layering in the more modern, street-style outfits. Lagerfeld can be very concerned with thinness (as a contrast to the traditionally boxy Chanel silhouette) so it was a welcome change to see these rather more padded-out styles. In some ways, several of them reminded me of traditional Russian and Eastern European-inspired designs such as those of Ulyana Sergeenko, possibly they acknowledge the existence of cold-weather clothes other than peacoats and cardigans. 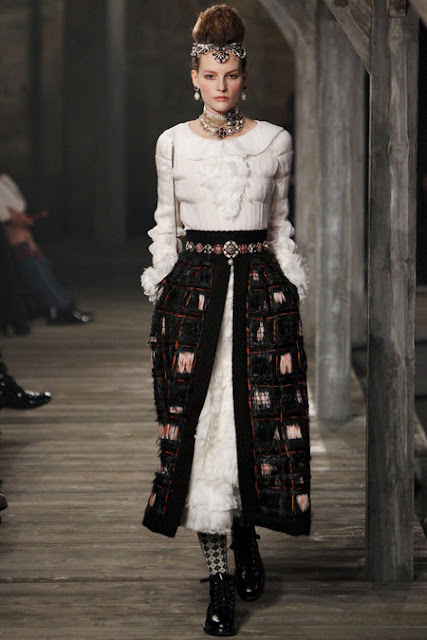 I love both these outfits, even though neither are exactly my style. The above outfit has clear Mary Queen Of Scots-era inspirations in the form of the split-front skirt, whereas the outfit below is 100% mid-century Scottish Laird's wife. 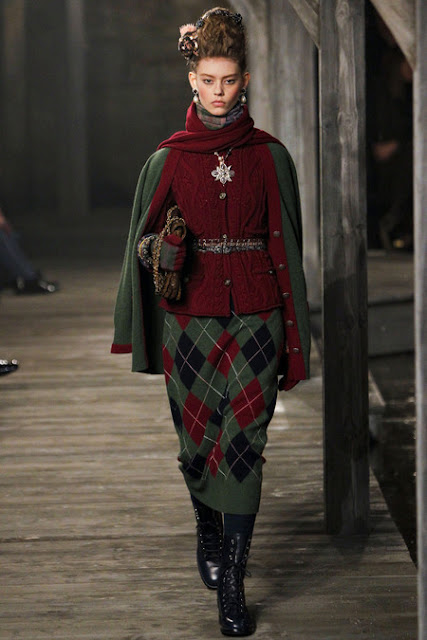 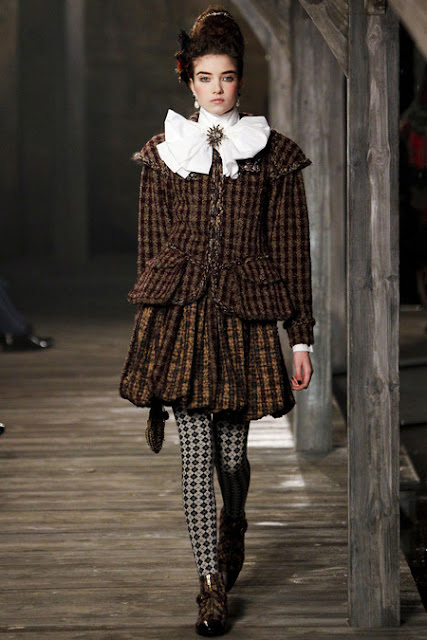 OF COURSE my favourite section of the show was the series of outfits with clear links to the padded faux-armour of the 16th century. In most cases puffball skirts replaced outright pantaloons, but I loved the jackets tailored to resemble doublets, as well as all the ruff-like collars. 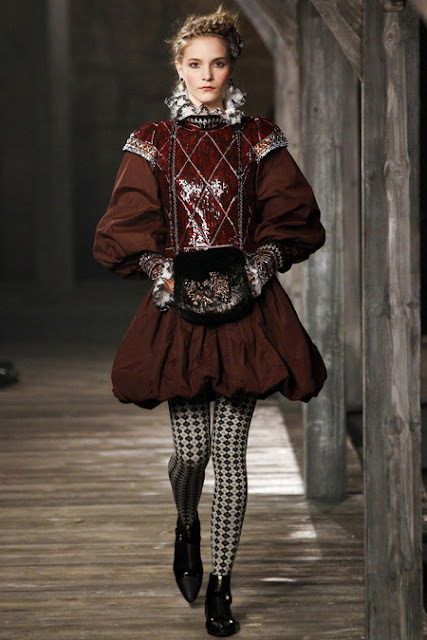 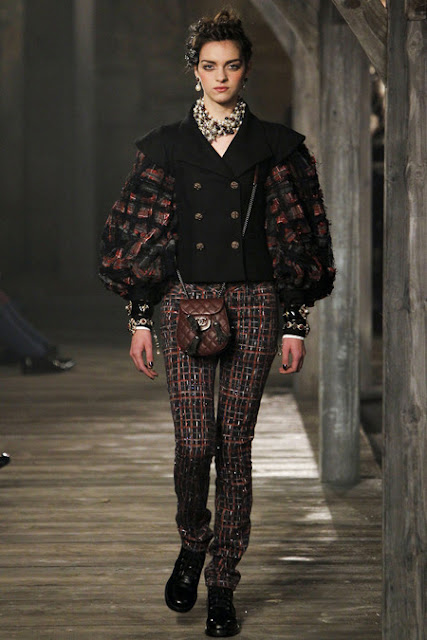 Oh, another detail I really appreciated about this show -- flat shoes. "Practical" isn't really something one expects from Chanel (especially Lagerfeld's Chanel), but this show proved that high-end designer clothes can be both interesting and comfortable. 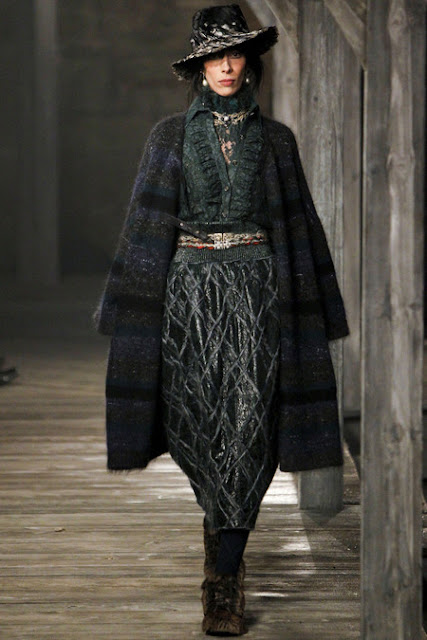 Rather than the single traditional wedding dress at the end of the show, there was an entire final phase of white gowns -- all of them warm and taking certain elements of inspiration from Renaissance-era Scotland. 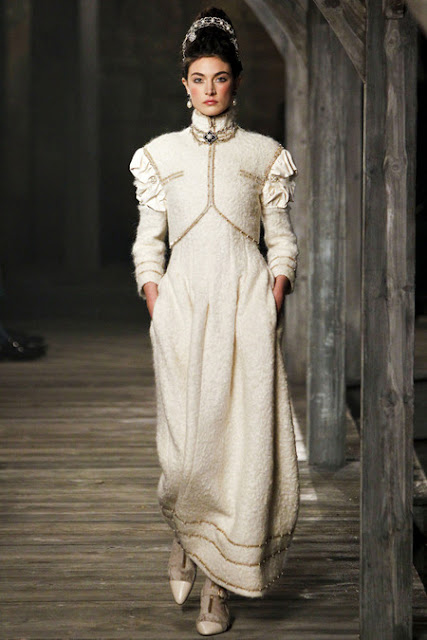 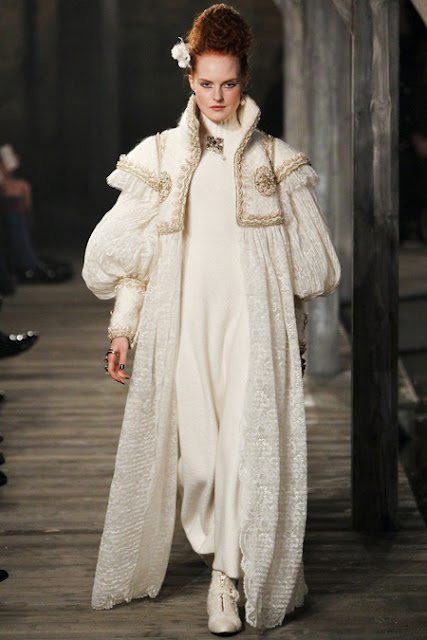 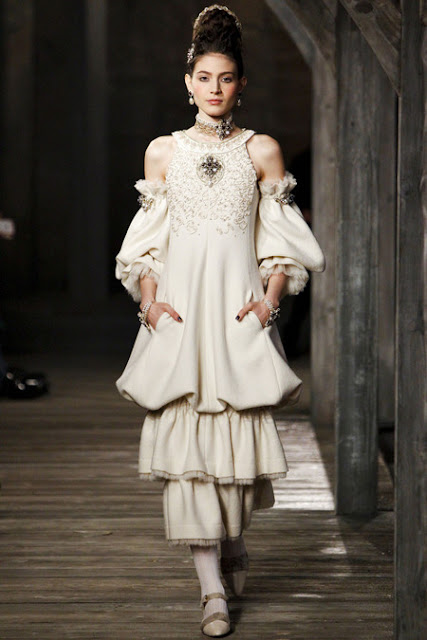