Miraculously, Snowpiercer lived up to the many months of anticipation I've experienced since it was released elsewhere. My friends, I have been waiting a long time for this movie.

Every component part of Snowpiercer was another thing that I love to see in blockbuster entertainment. I don't just mean in the shallow, tropey sense that I love dystopian sci-fi, but in the sense that Snowpiercer is a straightforward adventure story that doesn't play to the lowest common denominator. It's simple, but it's not stupid. Its characters are people, there aren't any shitty moments of casual sexism or racism, and it's structured around a piece of interesting, thoughtful political symbolism that you could probably still ignore if you just want to watch Chris Evans Save The Day. 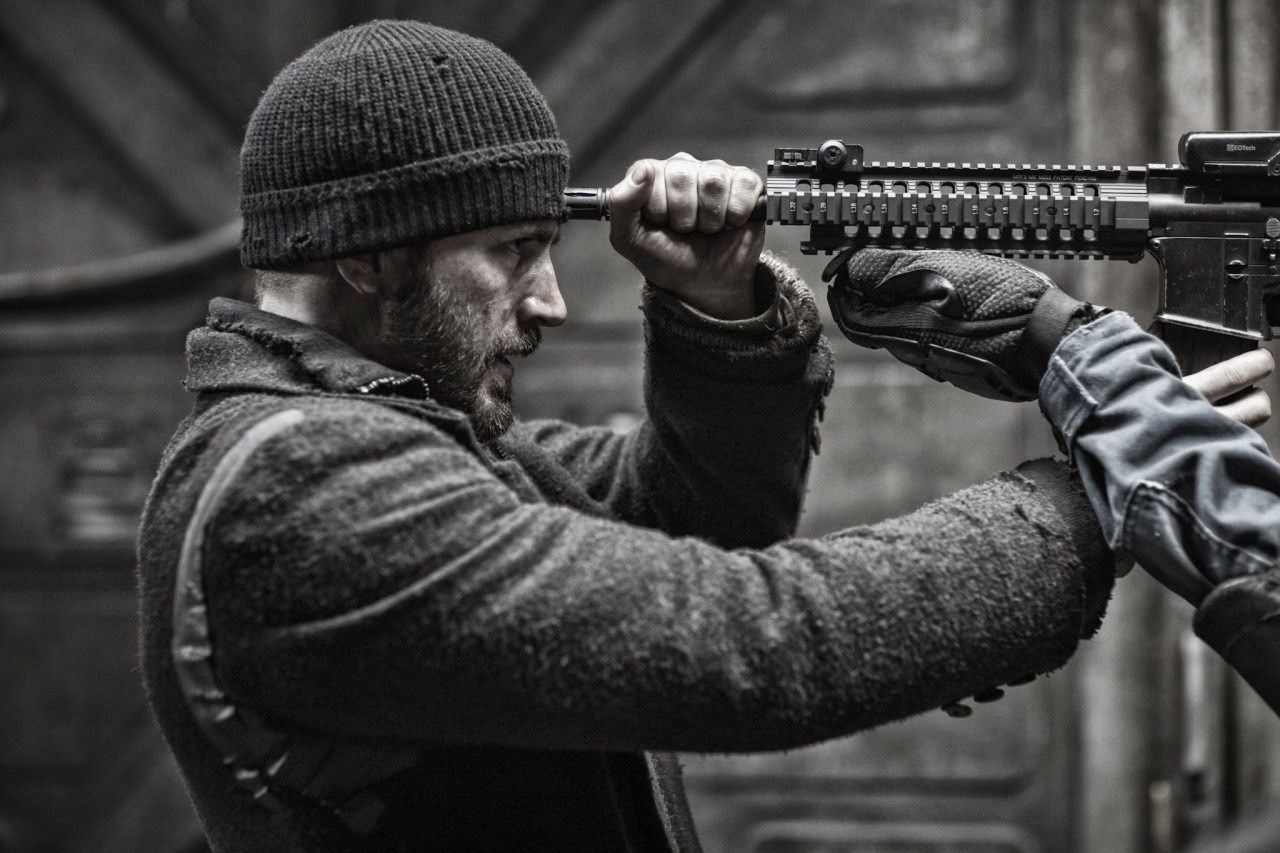 A friend of mine had issues with the implausibility of Snowpiercer's setting, but I found it pretty easy to accept on its own terms. Like the contrived scenario in Sunshine (another sadly rare example of a good Chris Evans film), the plausibility of the premise was almost meaningless. No, you can't reignite the sun with a weaponized disco ball rocketship, Sunshine. No, it isn't feasible for an entire civilisation to spend 17 years in a perpetually moving train, Snowpiercer. But there were plenty of intentionally surreal touches there to remind us that director Bong Joon-Ho was well aware that the setting wasn't "realistic.". More importantly, the underlying metaphor was clear: Crash the train and risk killing everyone to gain freedom for a few, or maintain the horrifying status quo so that more people can survive in undeserved squalor.

Having now seen Snowpiercer in its original cut, I find it genuinely baffling that Bong Joon-Ho had such difficulty with his US/UK distributors, the Weinsteins. If you haven't been following this saga (which you can read about here), the film came out last year in Korea, Japan and parts of Europe, but Harvey Weinstein somehow decided that English language audiences would respond better to a "simplified" cut. A cut that is rumored to have removed something like 20 minutes of the original movie (including Curtis's monologue at the end), and included the suggested addition of an expository voiceover.

You know, just in case the central plotline of "get to the front of the train" was too complicated.

As a result of this distribution fiasco, the original cut has been trickling through festival screenings for months, with frustrated film fans resorting to crappy bootlegs and European DVDs until the Weinsteins finally deigned to give it a limited release in the US. The situation sounds like a total mess, particularly once you've seen the film in question. I went into the cinema expecting Chris Evans to have a far smaller and less appealing role, for large chunks of the dialogue to be in Korean, and for the whole thing to be far weirder and more ~arthouse than it actually was.

In truth, Snowpiercer is very easy to follow, and contains all the elements required for a successful blockbuster: a famous lead actor and excellent supporting cast, an interesting concept, and a well-paced balance between action scenes and emotional impact. (Although personally, I found myself in the unusual position of wishing there were fewer action scenes, simply because they didn't always seem necessary.)

The belief that Snowpiercer wouldn't appeal to "mainstream" audiences is kind of depressing, especially when you consider the way Hollywood markets The Hunger Games as tween-friendly entertainment. Obviously the Hunger Games movies are less of a commercial risk in that they're adapted from bestselling novels, but seriously: Snowpiercer is hardly any weirder or more traumatising, and it stars Captain America. An even more damning comparison would be Cloud Atlas, which actually was strange and often impenetrable, but still received a huge amount of public attention while Snowpiercer languishes in distribution purgatory. 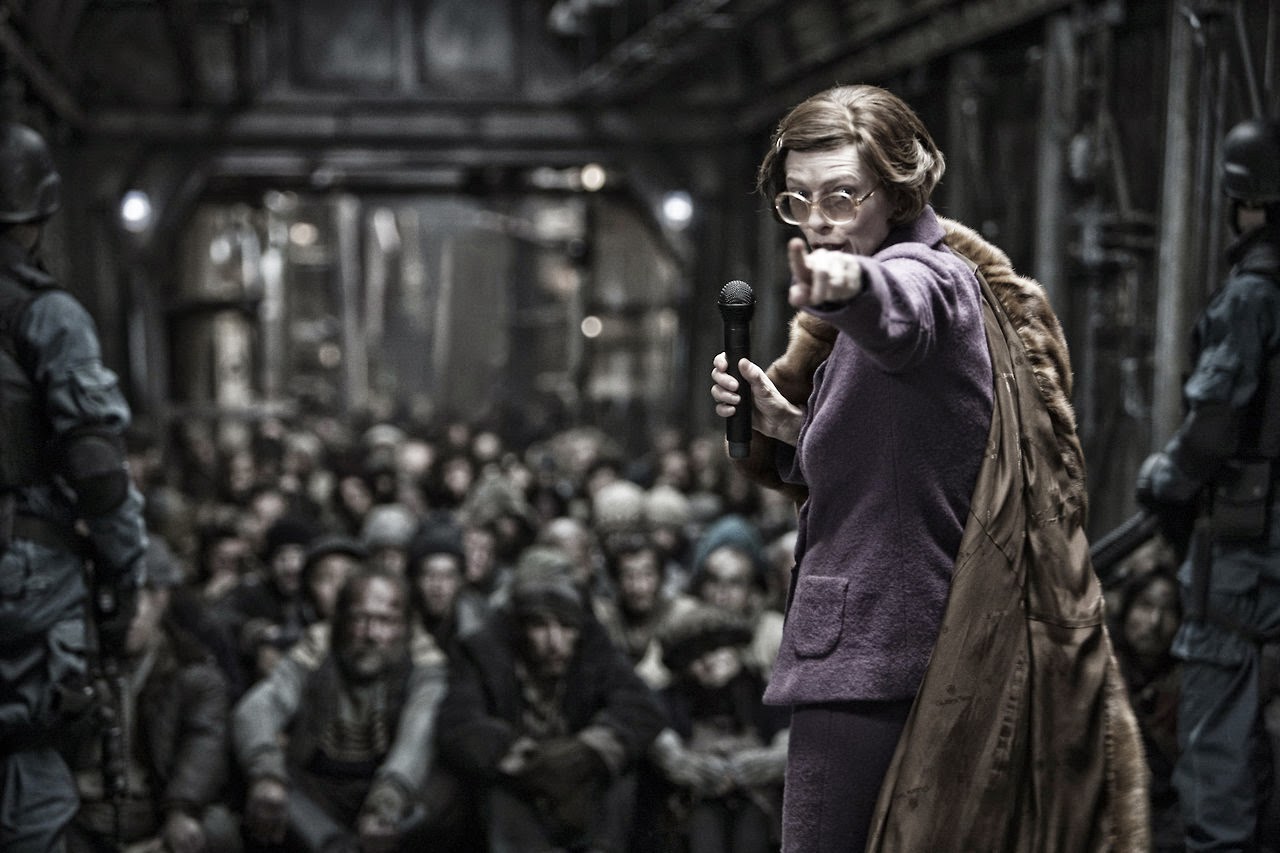 Snowpiercer may make no sense on a logistical level, but the train's social structure is basically true to life. However, instead of going for the peasant/monarch society you see in many dystopian stories of this type, I was interested to note that there's no practical reason for the colossal divide between rich and poor. There's no evidence that the people in Tail Section are forced into menial labour or ground up into Soylent Green, for example. In fact, the only people with jobs are service workers like the train guards, food production, entertainment for the upper classes, and Tilda Swinton's politician character. The vast majority of passengers are idle, and the people with visible jobs all appear to be enjoying their work -- even the train guards, who are mostly portrayed as thugs and sadists. 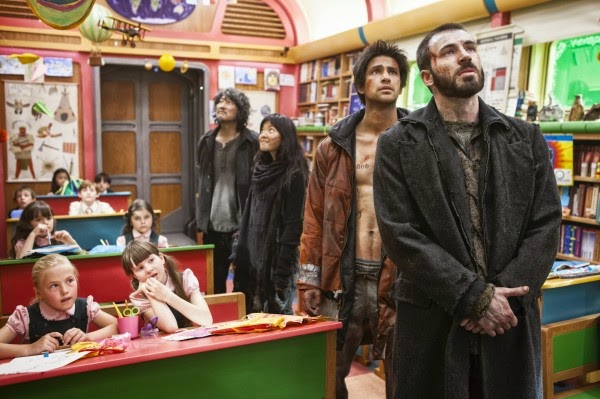 The sole exception is the invisible slave labour of the children Wilford kidnaps and hides beneath his floorboards. Timmy's reappearance in the Engine scene was one of the most unexpected moments of the film, partly because when you hear that a powerful man likes to collect children, the immediate assumption is that it's for horrifying entertainment purposes. But instead, the reason was something even more shocking, because we don't expect it. Wilford has dehumanized those children without a shred of remorse, reducing them to a literal cog in the machine.

Rather than having the Tail Section slums-dwellers work on something that supports the rich, we see them being force-fed cockroaches and beaten into submission while the rich take drugs and party (or knit and stare out the window, if they're old). The most significant piece of set design in Tail Section is their squalid bunkbeds, where they spend most of their time when they're not planning insurrection or standing up to be counted. The fact that they're not being forced into some kind of workforce highlights how false the entire system is, because it's clearly just based on Wilford's crackpot idea of how human society should be "balanced" for optimum survival. 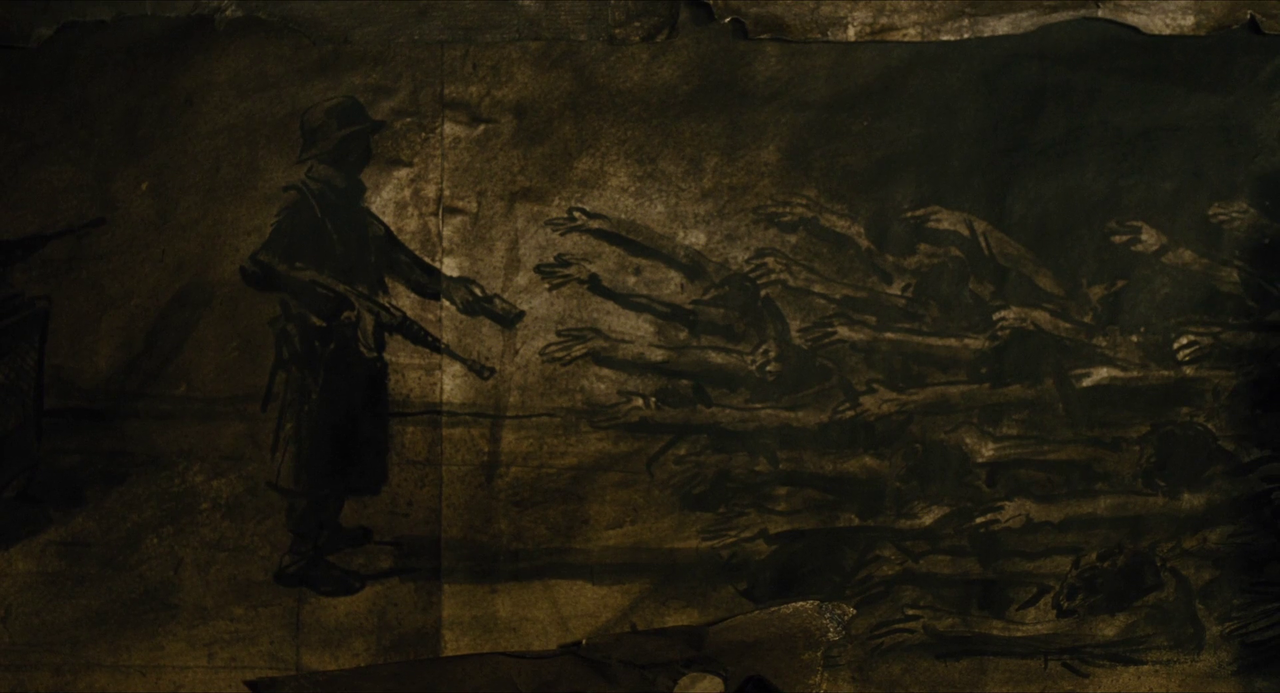 It's no coincidence that the man at the head of the train is a deified white patriarch, mirrored perfectly by John Hurt's Gilliam as the working class leader. Together, they keep everything aligned with their warped sense of "balance," and groom Curtis to become a similar leader once they're gone. The great thing is that despite his eventual heroism and self-sacrifice, Curtis really is a good choice of replacement for Wilford.

For all that we get to see that fantastic breakdown monologue at the end, we already know that Curtis is violent and fueled by revenge, that he doesn't trust himself as a leader, that he's the kind of person who would keep his followers in the dark in order to "protect" them (hello, cockroach soup), and that he would rather strategically capture an enemy than save the life of his best friend. Every one of these actions and character traits is understandable, but he's not sufficiently different from Wilford or Gilliam to give us much hope for a potential future with Curtis in charge. His rags-to-riches journey even mirrors what little we know of Wilford, who went from being a normal boy to the richest and most powerful man on the planet. 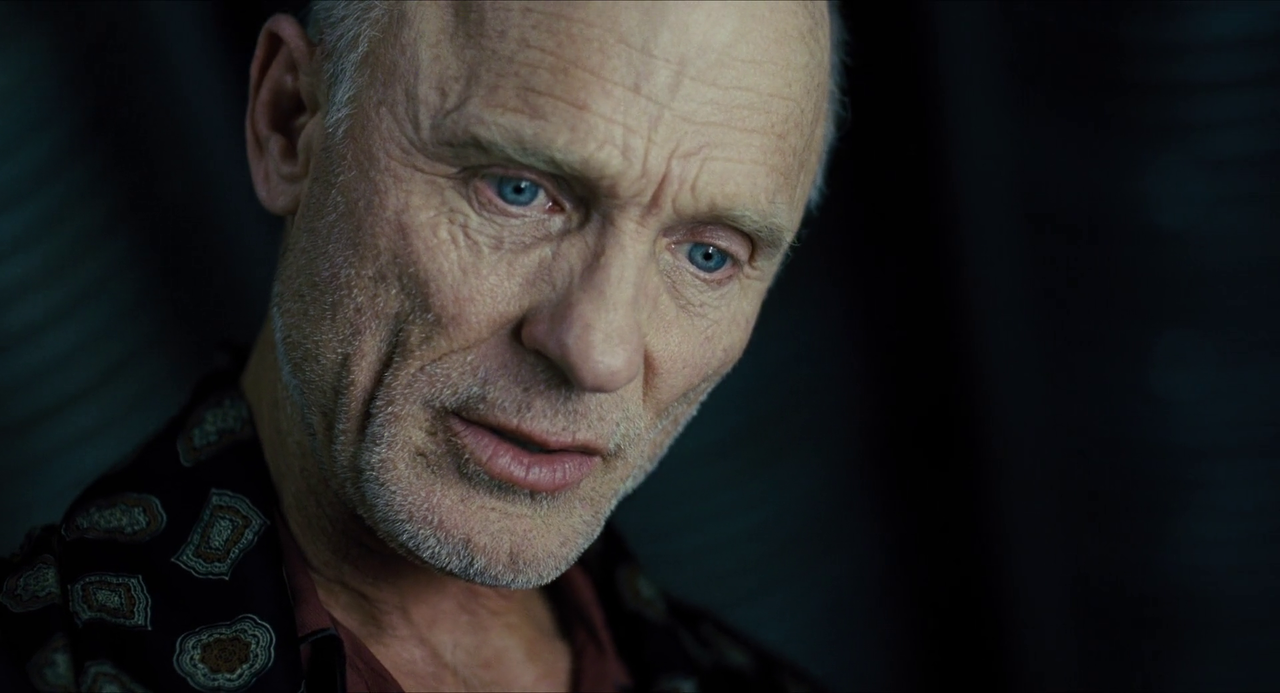 Wilford and Gilliam are the best kind of villain, because while they're clearly evil and manipulative and have no real care for human beings as individuals, they give every impression of having a near-religious belief in the "balance" of his train's self-contained ecosystem. Every good villain is the hero of their own story, after all.

The conclusive realisation isn't that Curtis has been tricked by Gilliam all along, but that there's no point in attempting to fight the system on its own terms (i.e. by Getting To The Front Of The Train). The only people who recognise the need for true revolution are Namgoong Minsu and Yona. And since this blog post has already careened into the territory of obnoxious undergrad political essays, I may as well describe Namgoong and Yona as what they are: Representatives of the counterculture and the marginalised. The prophets who have become reliant on mind-altering drugs because it's better than facing up to the truth that only they can see. 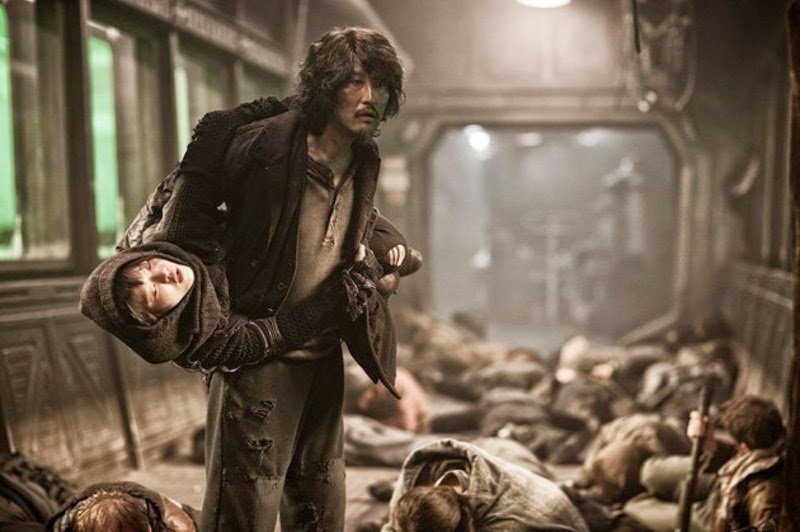 Snowpiercer is a post-apocalyptic movie about people who are obsessed with avoiding a repeat apocalypse in their ever-shrinking new world. They are hanging by their fingertips from the precipice of yet another disaster.

It's also a story about breaking points, and when Curtis and Yona reach that final moment at the front of the train, we learn that everyone's worst fear is little more than a fairytale. No one had even bothered to check whether the outside world was habitable again.

Once again, it's no coincidence that the central survivors this time round aren't Wilfords or Curtises, but are Yona and Timmy: both visually and thematically the polar opposite of the traditional ruling classes who took charge of the train 17 years ago. I love it all. Curtis is simultaneously a messianic cliche and a takedown of white saviour heroes, because the most important thing he does in the end is kill himself in order to save future generations from more of the same old bullshit. 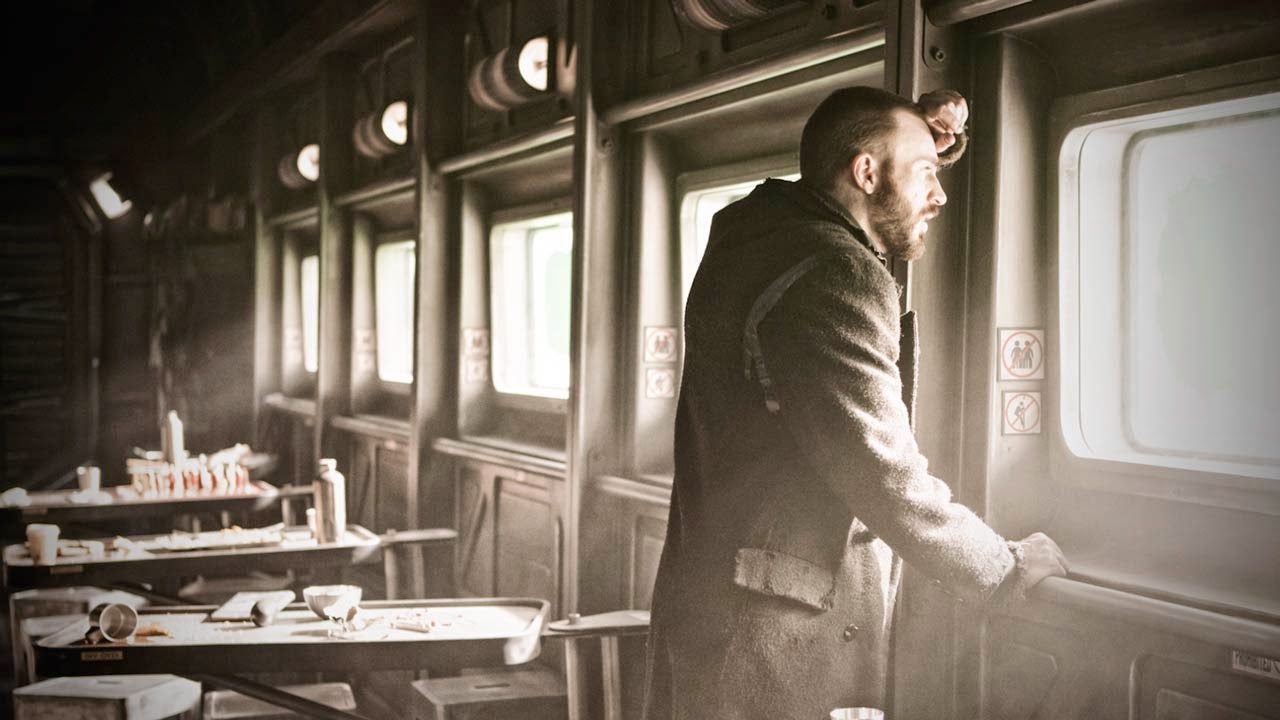 Curtis is a product of the train -- in fact, the film makes sure to point out that he can't remember life before he was onboard -- and as a result, he's an asshole. He's a brutal killer, and he has no qualms about meting out petty punishments like making Mason eat a cockroach bar while everyone else eats sushi. The difference is that unlike Wilford and Gilliam, he recognises that he has been corrupted by his surroundings. His drive for vengeance and power is the tool that frees people who otherwise might never have escaped: Yona and Timmy, the two great innocents of the movie. But of course, if he'd lived on as well, he'd probably just have turned into another Wilford.

Honestly, I could talk about Snowpiercer all day. I haven't even gotten into the film's visual beauty, or the way the revolution's journey progresses up the food chain from filth (cockroaches) through cleansing water to plants, then fish, and finally the atavistic party zone of first class passengers. There's also the unexpected humor, with Tilda Swinton taking on the role of darkly comic villain/minion, or the revolution pausing to gape at a classroom full of brainwashed but hilarious spoiled brats. If I have time then I'll write about the costumes in a later post, but for now I'll just live in hope that Snowpiercer will get a proper UK release so I can see it again some day.

Next: My interview with Snowpiercer costume designer Catherine George.
Posted by Hello, Tailor at 15:53