Part 1: "Trust No One" -- How Captain America became the gritty superhero we never knew we wanted.
Part 2: Hydra, Sitwell, and diversity in the Marvel universe.

Giving CATWS an ensemble cast was a smart decision. Not only does it make sense to position Steve Rogers as a team leader rather than a solo hero, but it avoids the tired formula of superhero + love interest + villain, plus supporting cast of sidekicks and parental figures. Steve may still take the central role, but characters like Nick Fury and Black Widow certainly don't fall into any of those categories.

As Marvel Studios slowly begins to explore other genres (Thor as an operatic fantasy, Guardians of the Galaxy as a space epic), they can branch out into building characters with more depth and ambiguity than the traditional superhero formula allows. 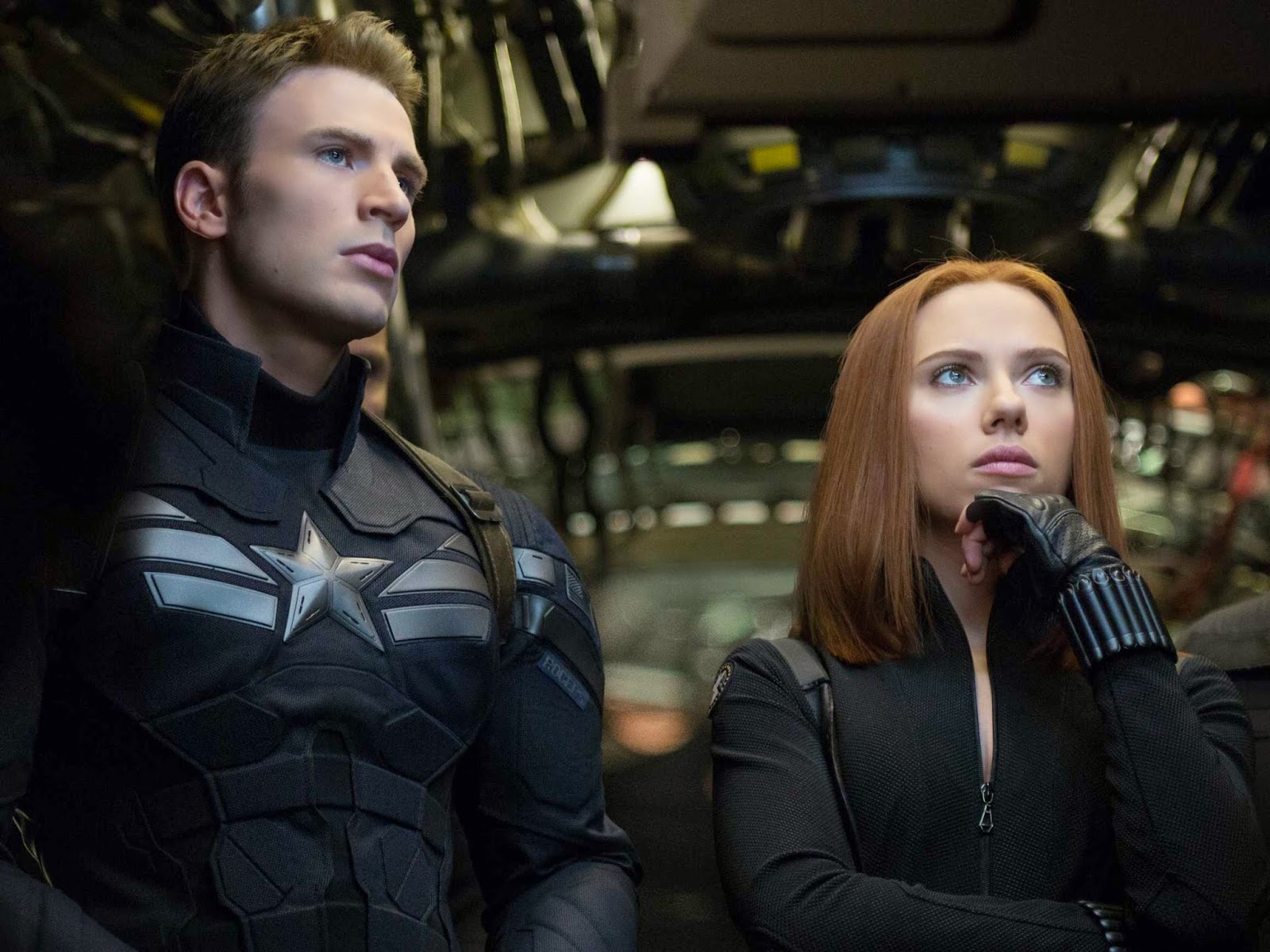 I already discussed this in the first part of my review, but basically it would've been a mistake to try and build a typical 21st century superhero story around Steve Rogers. After all, his "superpowers" pretty much boil down to enhanced strength and healing abilities. There are already so many action movies about supposedly normal humans performing superhuman stunts (think of John McClane's progression from middle-aged everyman in Die Hard to indestructible teflon droid in Live Free or Die Hard) that Cap's physical strength runs the risk of seeming unimpressive when compared to, say, Iron Man.

Instead, this movie is more about the importance of teamwork and good leadership: a perfect development for a character who went from standing up to schoolyard bullies to selling American military propaganda to leading a close-knit group of commandos into Nazi-occupied Europe. Captain America's image as a hero is more about personality and symbolism than it is about Steve Rogers' ability to fall 50 feet without breaking his knees.

There are far too many misconceptions about Black Widow's role in the Avengers franchise, either caused by people's existing prejudices (i.e. the assumption that any woman in a "catsuit" is just there for sex appeal), or because her characterization is subtle when compared to her larger-than-life superhero counterparts. Characters like Tony Stark and Falcon are easy to understand on a superficial level, but Black Widow tends to get overlooked because her emotions and motivations are often so obscure. 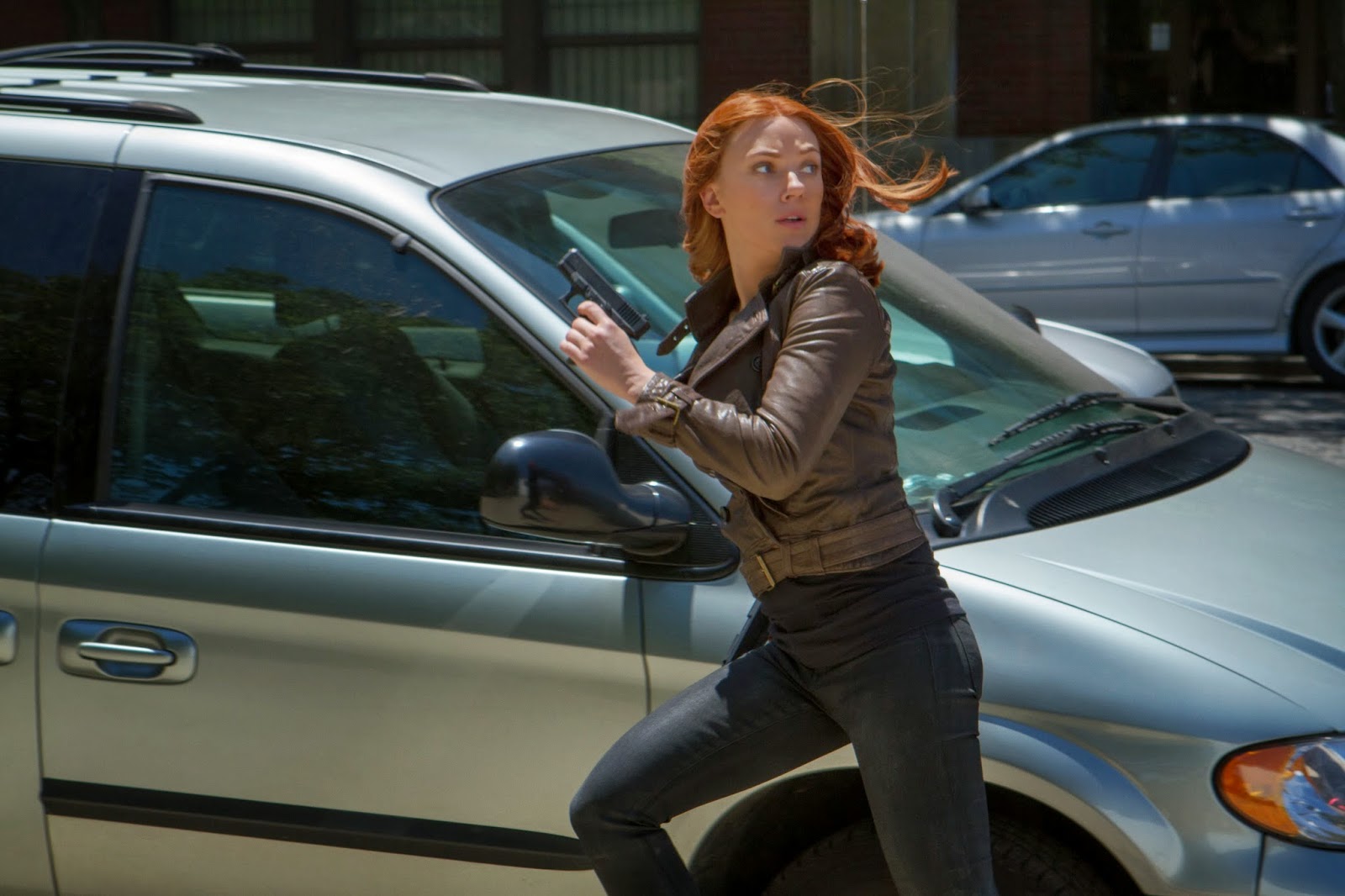 Last week I wrote an article about the way professional critics responded to Black Widow in The Avengers and CATWS, highlighting how many of them simply couldn't look past Scarlett Johansson's image as a sex symbol. Regardless of how good you think the Avengers movies are in general, it's just plain inaccurate to suggest that Black Widow is written as overly sexualized or two-dimensional. It was depressing to see how many well-respected critics assumed Black Widow's purpose was just to "kick ass" or provide eye candy, when her role is so explicitly cerebral: interrogating Loki, strategizing with Cap, and working with SHIELD to evaluate who should join the Avengers team in the first place. 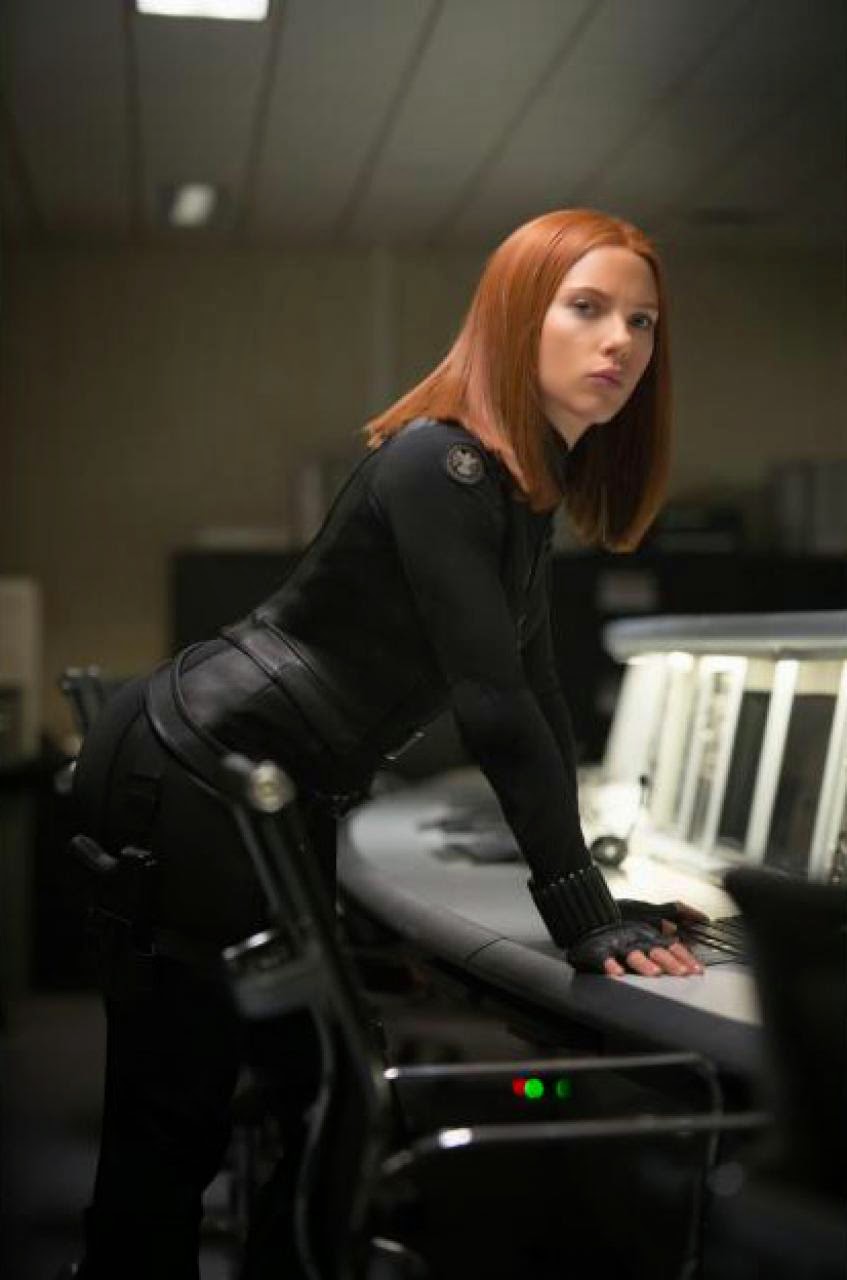 After I first saw Avengers, one of the guys I watched it with immediately asked if I was irritated by the one scene that supposedly gives us a "male gaze" view of ScarJo's body: a full-body shot that showed Black Widow's back while she was interrogating Loki in the helicarrier. The thing is, to me this didn't even feel like a "male gaze" view at all. This type of movie is usually full of scenes where the camera pans up and down a woman's body for no reason, but in that scene all we really saw was a view of Black Widow from behind, as she stood and talked to Loki. 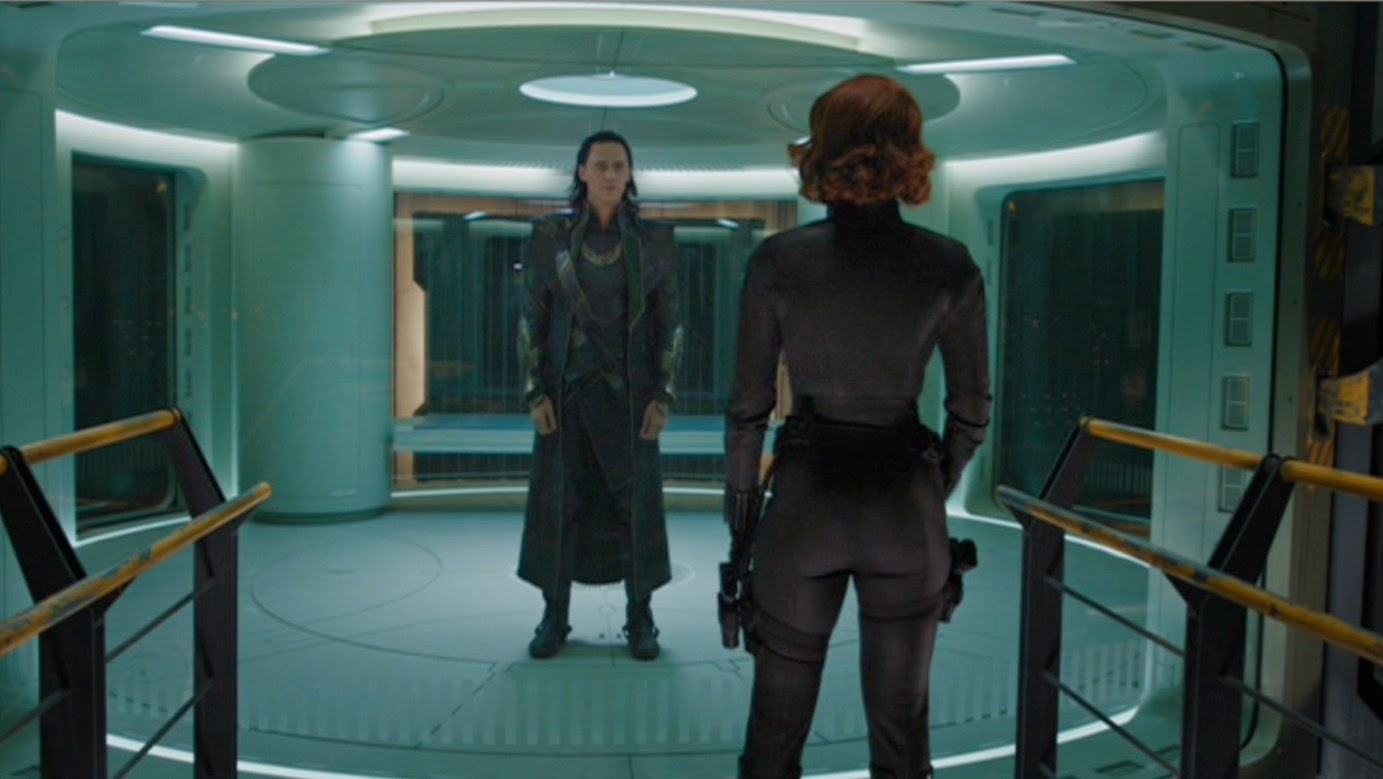 Sure, it was Scarlett Johansson in a tight bodysuit, but it was on precisely the same level as an earlier scene where we see Steve working out in a tight white t-shirt. CATWS had one vaguely male gaze-y shot of Black Widow in her catsuit... but then she spent the rest of the film in hoodies, jeans and leather jackets. This isn't so much a case of ScarJo being sexualised by the filmmakerss, but of viewers sexualizing her because, well... she's hot. You could say exactly the same thing of half the male actors, particularly since Cap, Bucky and Thor have all had at least one shirtless scene so far. The main difference is the all-too-common assumption that a hot female character is just there for decoration/sex appeal, whereas a hot male character is hot in addition to being a character in his own right.

CATWS gave us the most complex look we've seen of Black Widow so far. Her characterisation was just as subtle as we've come to expect, but this time round it fit much better with the film's tone as an espionage thriller. Plus, she was actually given second billing on the cast list, which is unheard-of for a female character who isn't a love interest.

In the action/adventure genre, we typically see movies that focus on either a male hero with a female love interest, a team where men outnumber women by about five to one, or a female hero wjth large supporting cast of men to "balance it out." Black Widow is a rare example of a female action movie character being given the kind of platonic ally/partner role that would usually be taken by a dude. 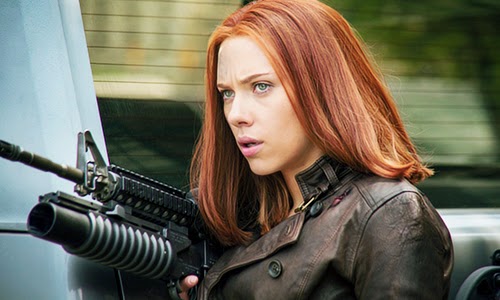 For me, the most revealing Black Widow moment was right at the end, during the graveyard scene. In her three MCU appearances so far, Natasha is characterized as competent, reserved, analytical and untrusting, with a very dry sense of humour. The breakdown of SHIELD exposed more of her emotional vulnerabilities, particularly when Fury "died" and then revealed that he didn't trust Natasha enough to let her in on the secret.

It now seems likely that she was feeling miserable all along, but this only becomes apparent at the end, when she's suddenly all smiles and excitement at the prospect of forging a new life for herself. After the horrifying discovery that she went from the KGB to a supposedly "good" organization that was actually rotten to the core, she's finally at a point in her life where she no longer takes orders from anyone. So while she's definitely less of a basket case than Steve Rogers, that graveyard scene gives us some perspective on how much effort had gone into her expressionless and intimidating demeanor at SHIELD.

One slightly bizarre comment I saw the other day was that all those "you should date this girl from the office" scenes between Natasha and Steve were somehow too ~stereotypically feminine~ for Natasha. Like... don't talk about people's love lives, because it's too girly? Or something? I don't subscribe to that interpretation, partly because I doubt the writers were trying to characterise Black Widow as a tween girl at a sleepover, and partly because there are so many more interesting ways to look at those conversations. 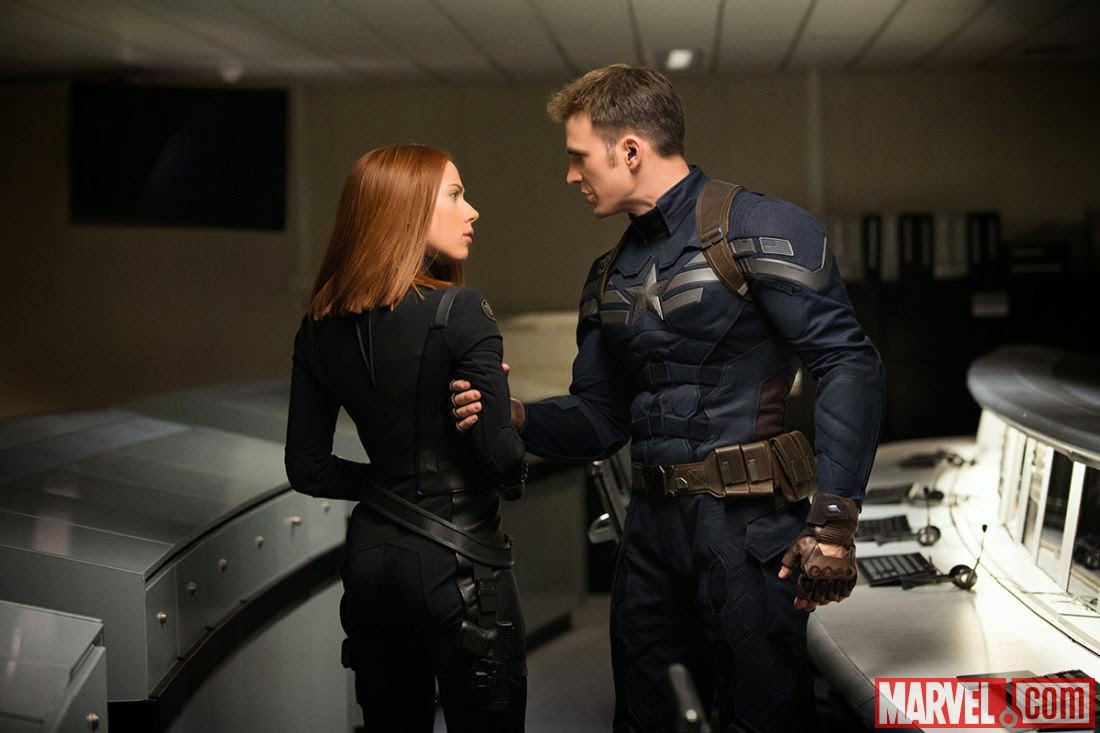 Natasha is very perceptive, and no doubt understands that Steve's problems have less to do with his fish-out-of-water situation, and more to do with his crushing loneliness. Steve gives every impression of genuinely liking people, but he's lost everyone he's ever known, and is surrounded by people that he doesn't really trust. He's so lonely that he's at the point of having intensely emotional conversations with a guy he met while jogging at the park, so Natasha is making the effort to help him improve his social life. All of those girlfriend recommendations also come with a subtextual hint that she doesn't want to date him, thus discouraging the possibility of him getting too attached. She's purposefully putting herself in the role of team member rather than potential love interest, and as a result they seem to have a pretty close relationship already -- or as close as you can ever get to Black Widow.

One of the very few ~spoilers I heard before I saw this movie was that in terms of storytelling tropes, Sam Wilson's role was very similar to that of a love interest. And you know what? It totally was.

Right from the first time he appears onscreen, Sam is characterized as an appealing and fundamentally good person. It wouldn't be an exaggeration to describe that park scene as a meet-cute, with Steve being so drawn to Sam that he has to befriend him, and Sam being so open and receptive that he invites Steve to come visit him where he works.

On their second meeting, Steve is impressed by Sam's work as a counselor for military veterans, and the two of them almost immediately open up to each other about intensely personal aspects of their lives: the death of Sam's best friend, and Steve's uncertainty about his life in the 21st century. This exchange has such an impact that Steve feels able to show up on Sam's doorstep as a fugitive, and Sam is willing to risk his life to fight alongside him. The film ends with the implication that Sam is going to quit his job to go help Steve track down the Winter Soldier. 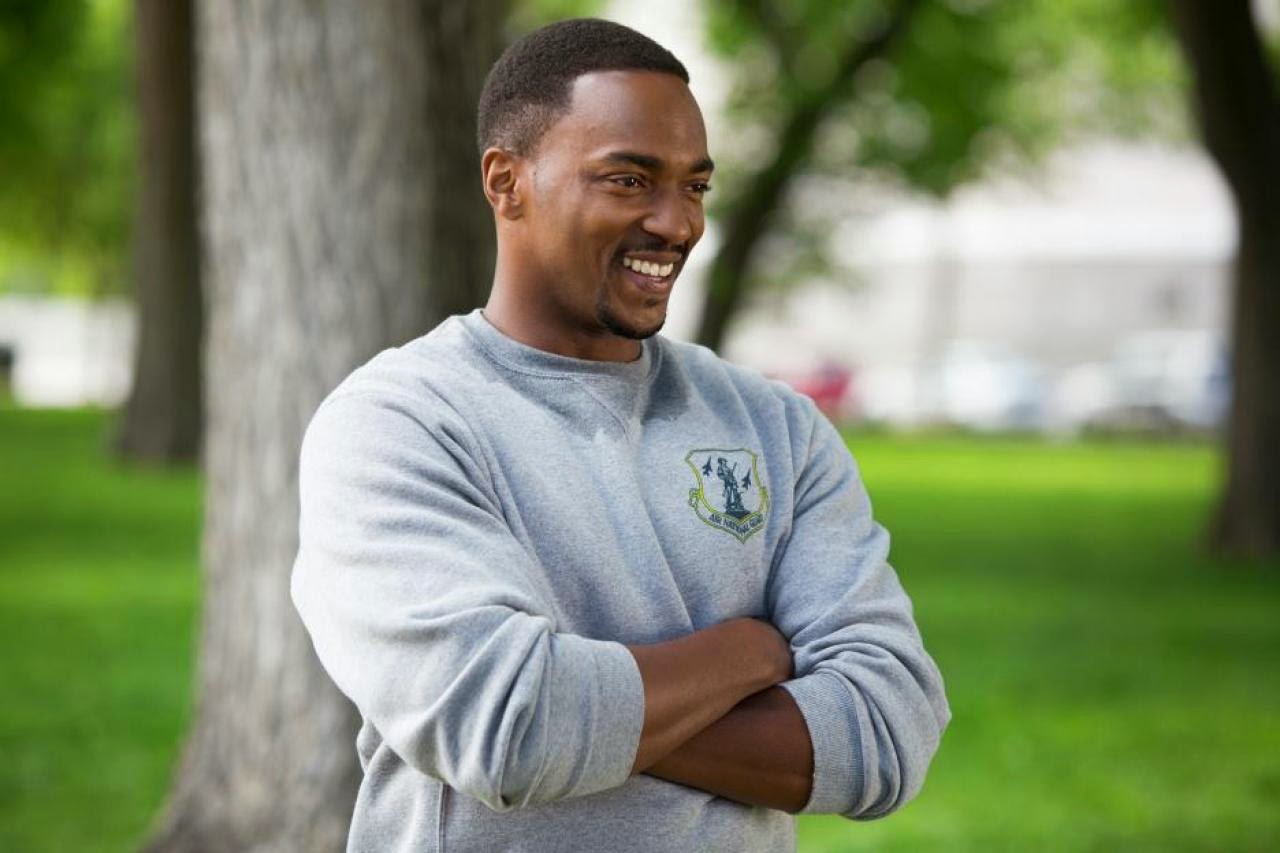 Bear in mind that I'm not saying "Falcon is literally Cap's love interest," but rather, "Falcon's role is structured like a love interest in a typical superhero/action movie." Another thing that supports this interpretation is the fact that he is by far the most emotionally balanced character in the entire movie. He's also explicitly characterized as being a nurturing kind of person, working as a group counselor at the VA and encouraging Steve to discuss his feelings.

In most superhero movies, the (female) love interest is a calming influence, without any serious emotional problems of her own. Hilariously, the only exception that comes to mind is the incandescently awful Spider-Man 3, in which Peter Parker proves himself to be a terrible boyfriend on multiple fronts, including belittling Mary Jane's low self esteem to her face. If you look at love interests like Pepper Potts, Lois Lane, and Jane Foster from the Thor movies, they're all on a relatively even keel compared to the rampant emotional problems and/or traumas faced by their superhero boyfriends. 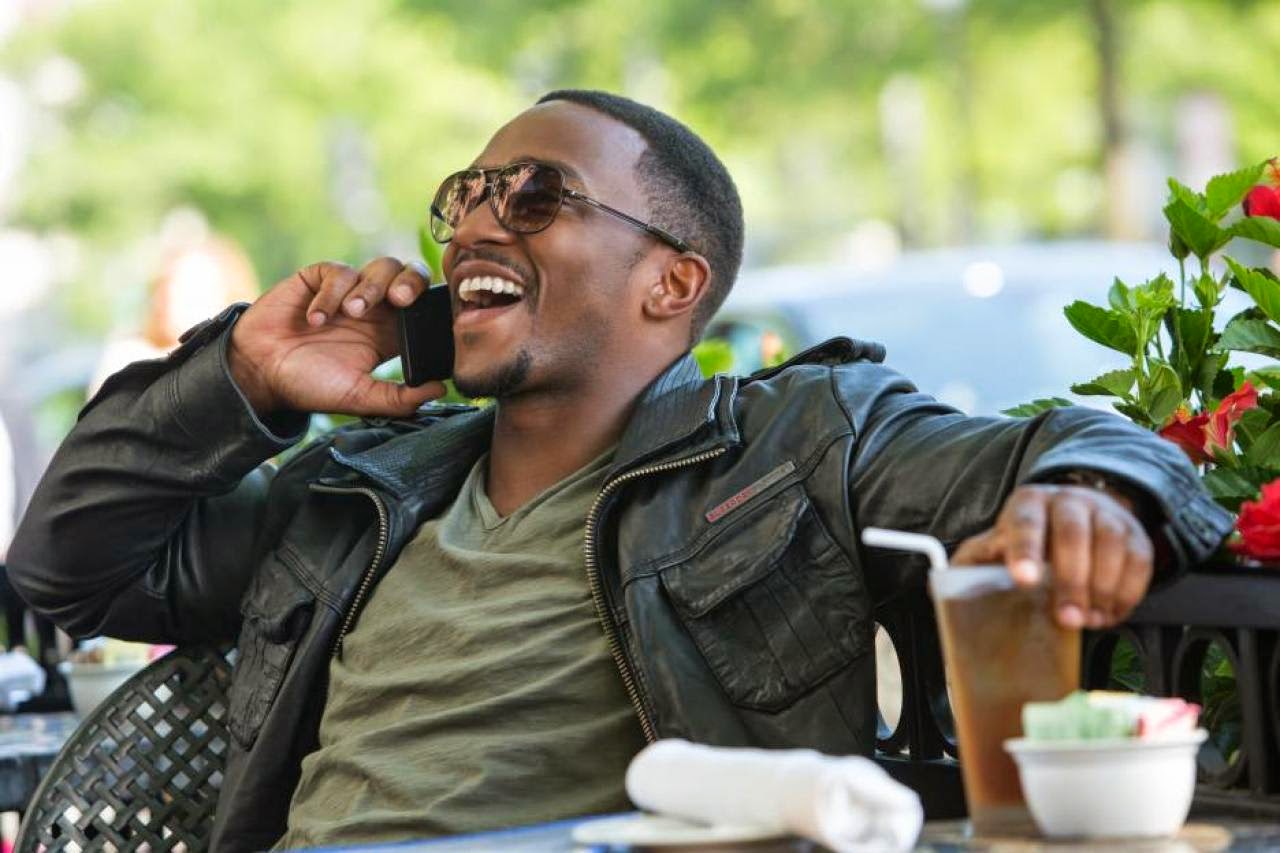 Now, this is partly because Iron Man, Batman etc. are The Heroes, and therefore their various daddy issues and moral dilemmas take up more screentime than whatever is going on in their girlfriends' lives. But it's also because those female love interests tend to take a supportive role, with most of their personal conflicts having something to do with their boyfriend, such as his secret identity or the dangers of his work as a superhero. Don't get me wrong here, I think Pepper Potts and Jane Foster and Lois Lane are all brilliant characters. My point is that Sam Wilson's role is directly comparable to the way they interact with Tony Stark, Thor and Superman.

The simplest explanation is that Falcon had to be introduced in a way that allowed him to plausibly fight alongside Cap and Natasha after just a handful of scenes. The easiest way to do this was for him to be the friendliest, most likeable dude ever, which was helped along by the fact that Anthony Mackie could have chemistry with a rock. Seriously, he was pure joy to watch. GIVE ANTHONY MACKIE A FALCON MOVIE AT ONCE. And don't infuse it with excess manpain, make sure it's properly balanced like the Thor movies, which show Thor as a friendly and optimistic person who just happens to end up in difficult and depressing situations. Sam Wilson is my only hope for any of the Avengers getting some decent therapy, and oh boy do they all need therapy.