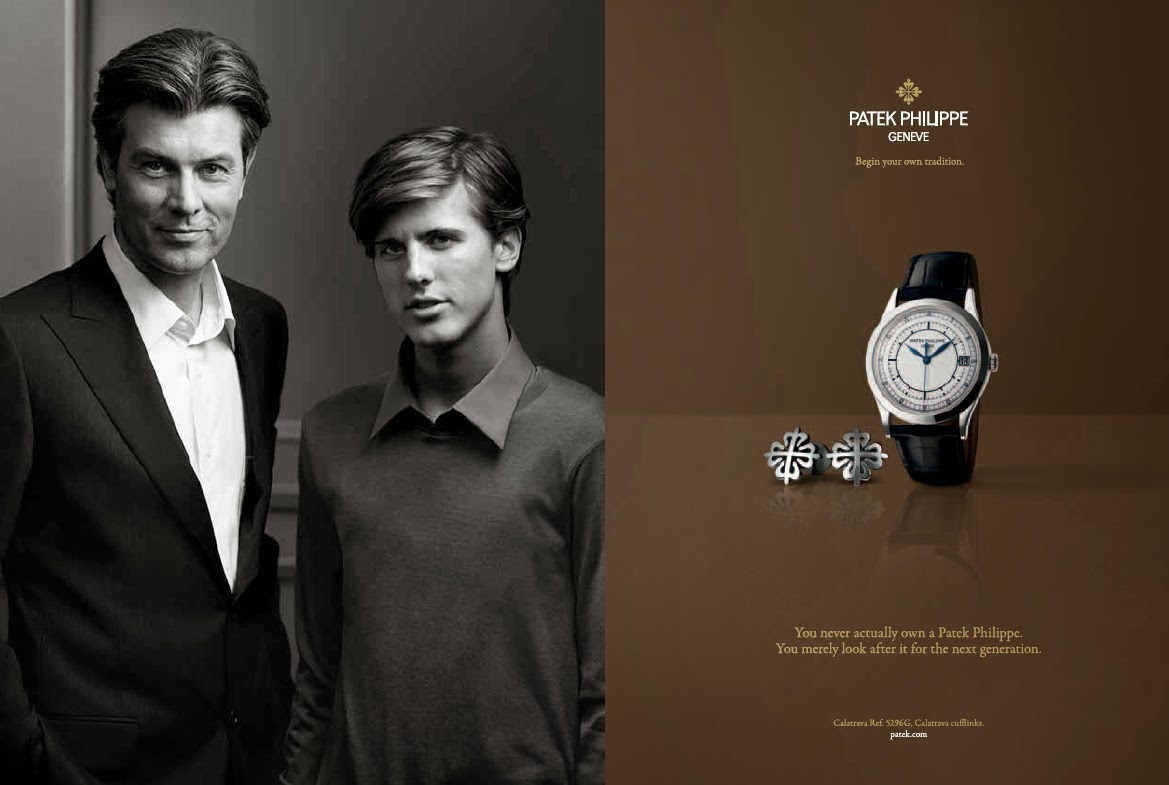 Obviously this is schmaltzy as fuck. It's all about getting rich guys to buy into this notion of some noble patriarch father-son connection through this status symbol. Hannibal would think it was pathetic. That said, the aesthetics of the particular watch they have him wearing seem pretty spot-on: It's large, but not distasteful. It's also expensive, but not some horrendous diamond-encrusted monster.

However, I'm still on the fence about it thanks to Patek's image as a brand. If Hannibal is into his mad expensive watches enough to shell out that kind of cash,  I reckon he would either go for one of these:

The first is a HANDMADE GERMAN MAMMOTH IVORY WRISTWATCH. WTF PERFECT. The second is a watch which occupies to same kind of price bracket and technical style as the Patek but is from a brand that Hannibal would probably like more, the gravitas-laden A. Lange & Sohne Datographe. This watch is generally seen as one of the best designs to come out of the industry in the last 10 years. There are also other options from that brand, including this brown/gold model, and the circular watch in this photo, which I think is the right kind of fussy for Hannibal.

So, in summary: The watch Hannibal wears is a good choice in terms of characterisation: luxurious yet reserved, with incredibly expensive material (platinum) and a billion complicated extra functions (moonphase, a calendar that doesn't need correcting, etc). BUT it's from a brand I personally think he would sneer at. Honestly, if it weren't for the advertising, the Patek Phillippe one would be nearly perfect. But if it were a choice between the Lange and the Patek I think he would get the Lange, as it's more "niche."

THAT BEING SAID, WHAT CANNIBAL WOULD PASS UP A WATCH MADE OUT OF BONES, AMIRITE?

HelloTailor: Perhaps this is just my own personal taste coming into play here, but I can't really imagine why Hannibal would bother to spend $176,300 on a wristwatch. Taking into account things like accuracy, raw materials and craftsmanship, there is still NO WAY that this price tag serves any purpose other than to indicate that the watch's owner is Very Rich. In fact, my opinion on almost all high-end watches of this type is that they all seem like obnoxious status symbols for men who want to wear something super expensive and sparkly, and see overpriced watches as the only socially acceptable outlet for this desire.

Considering Hannibal's dislike of classless displays of wealth and bad taste, my instinct is that he'd be pretty scornful of the super-rich culture of buying ostentatiously pricy designer watches. Hannibal may be a master of conspicious consumption, but it's always towards a very specific goal. Super-expensive timepieces are altogether a different flavour of connoisseurship than a bespoke suit or an art collection, particularly since they all seem to include these functionally useless extra features like the ability to work in zero gravity or ten miles underwater. I like the idea of Hannibal with an antique watch, perhaps an heirloom from his uncle. I pitched this idea to my brother and he came back with this:

Good point. The least expensive watch I listed is (I think) the mammoth ivory one at around 30,000 Euro:

One of the reasons why I was put off by the Patek is it was a little TOO expensive. I can see Hannibal shelling out maybe $50k at maximum if he found something that really tickled his materialism tastebuds, but Patek are infamous for being aggressively highly priced. They kind of rely on being more expensive than their competitors, which is part of the con of "exclusive" luxury products.

Regarding your more specific issues about jewel-encrusted watches and pointless zero gravity stuff: the brands I listed are considered to be the conservative elegant options. Part of their branding is focussed on them being restrained as opposed to the really ostentatious stuff you see from people like Rolex. Brands like Patek and Lange & Soehne make their name on not being jewel-encrusted. Each kind of mechanism has a different market audience, so for example, Chronograph functions are marketed at "practically minded" clients (i.e. playboys with yachts), while Minute Repeaters (which sound out the hours and minutes on musical gongs inside the watch) are seen as the haute couture complication, and are a source of prestige for any brand. 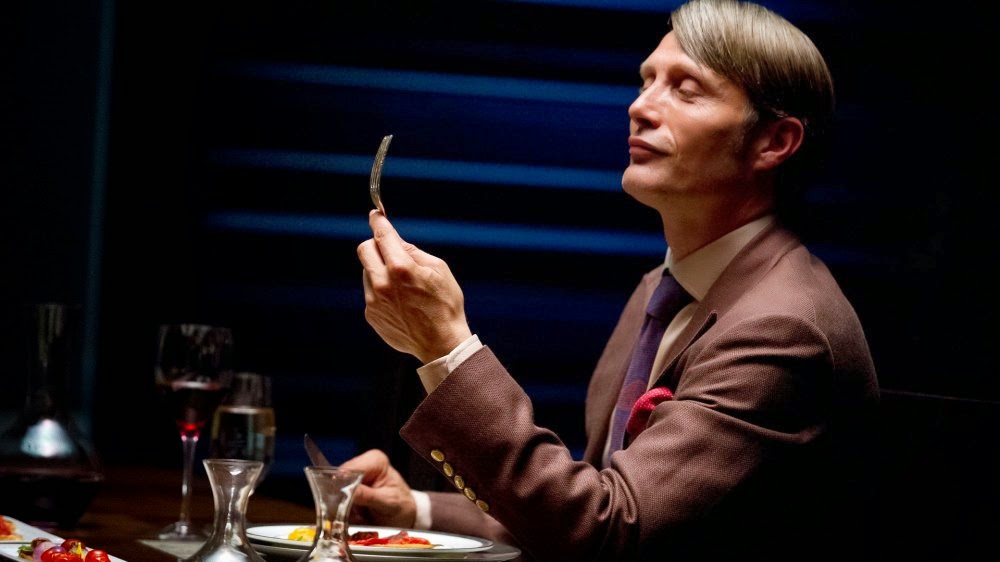 Ultimately I was only speaking in the context of wristwatches that I would substitute into that modern, posh, exclusive bracket that the show dictated with the Patek. If I were to pick any watch for Hannibal I would agree that an heirloom would be the best choice.
In an antique heirloom context we are limited to wristwatches from around 1930 to 1960. Early men's wristwatches were very small by modern standards, and non-military watches from the '30s and '40s might actually be too small for showy Mads Hannibal with his big ties. I'd probably recommend a classic Jaeger Lecoultre Reverso. Why? It's the perfect murder watch: you can flip the case around to protect the glass from being damaged. It's also just as classy and refined and exclusive as the other watches, but less expensive. Modern Reversos retail at around £10k I believe: much more comfortable.

If we were talking about something really old-school, Hannibal might conceivably have what is known as a "montre-a-tact." In many ways this is the polar opposite to some of the watches I originally listed. It's a pocket watch designed to be both as luxurious and discreet as possible. In early 19th century France the famous maker Breguet made a few of these. The watch is designed to have a hand on the outer case that you can feel in your pocket to tell the time without looking rude by checking your watch in front of your guest. It's the ultimate rich asshole watch.

[Note from HelloTailor: I particularly appreciate this choice because it plays into the tactility of Hannibal the character and Hannibal the show, which always attempts to engage all five senses rather than just concentrating on sight and sound. Hannibal's sense of smell is often in the foreground, and we regularly characters discussing and experiencing the taste of his cooking. Plus, Hannibal clearly appreciates the sensual pleasure of high-quality clothes, furniture, and so on. It's also worth noting that Will Graham has the habit of touching and stroking things all the time. A watch that works partly by touch wouldn't be a bad choice for Will, either.]

One last thing: Bone clocks. There is a subgenre of clocks called "skeleton clocks," which despite the name are not typically made out of dead things. The descriptor is visual, as in a skeleton leaf. They are clocks where the brass plates have been finely cut away into patterns and swirls. In the mid 19th century a few (and by "a few" I mean only a handful as showpieces by famous or skilled makers) were made in papier mache, ivory, and bone. Bone is a poor material for clock wheels due to humidity issues and it isn't very tough, hence the mammoth ivory watch having all the important bits made out of metal. For obvious reasons, a bone clock would be absolutely ideal for Hannibal Lecter.

(If you want to read more where that came from, my brother has a Tumblr blog all about watches and watchmaking: Practical Horology.)