Entirely by accident, this season's Dolce & Gabbana turned out to be incredibly topical. Inspired by the Vatican and showing at Fashion Week just after the news broke about the Pope's retirement, this collection was guaranteed to appear prominently on the pages of every fashion magazine in the known universe. The only thing better than tall thin ladies wearing sparkly clothes is tall thin ladies wearing sparkly clothes in a newsworthy context. For this reason, I'm going to take a few moments to consider the implications of our briefly Popeless world. NEWS.
You know in movies when there's a retired cop (probably played by Bruce Willis) who is brought back for One Last Job? Well, I'm kinda wondering if it's the same with popes. Like, if in the next couple of weeks there's an unexpected demonic armaggedon, can we call Pope Benedict XVI out of retirement to lead the faithful into holy war? Ignoring the fact that it's kind of illogical already to be able to hand in your resignation from being the earthly voice of god, I'm curious about the Pope Emergency issue. Hopefully we can still rely on Ratzinger to come to our aid in times of Biblical disaster. 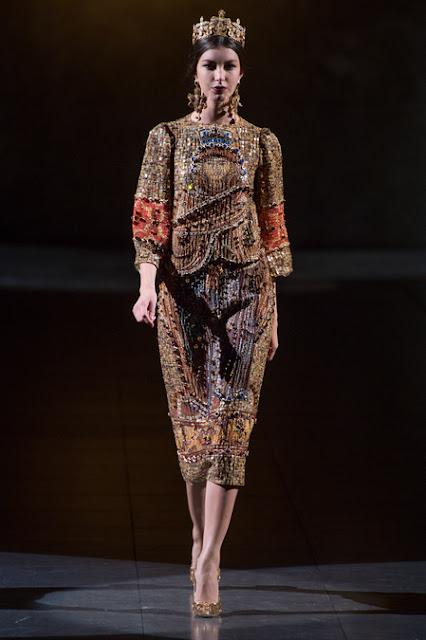 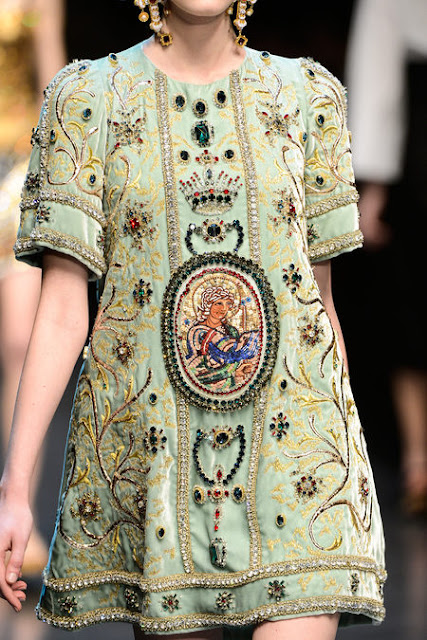 Back to D&G: this show was so luxuriously detailed that it looked more like Couture than Ready To Wear. The embroidery and beadwork was inspired by Catholic art such as the Byzantine mosaics in the cathedral at Monreale, although the focus was more often on D&G's home island of Sicily. 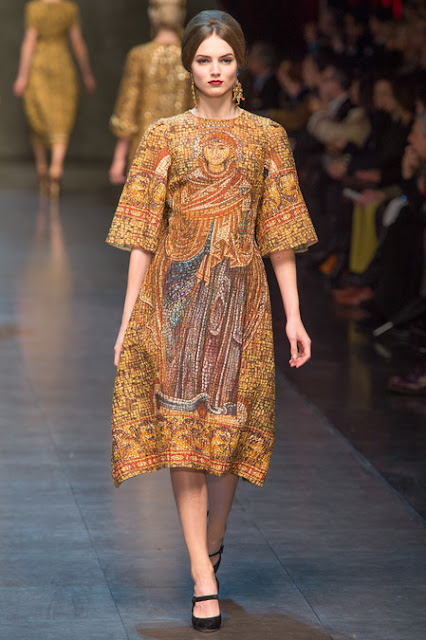 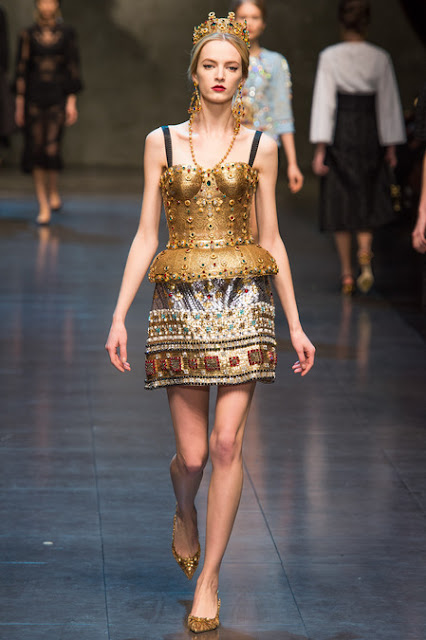 The aesthetic was a combination of celebrations of Catholic imagery, and outfits inspired by the red vestments of Cardinals. If anything, this show offered a classier view of the Catholic church than is currently being projected by the church itself, as the focus was purely on the beauty of its art rather than any deeper meaning. 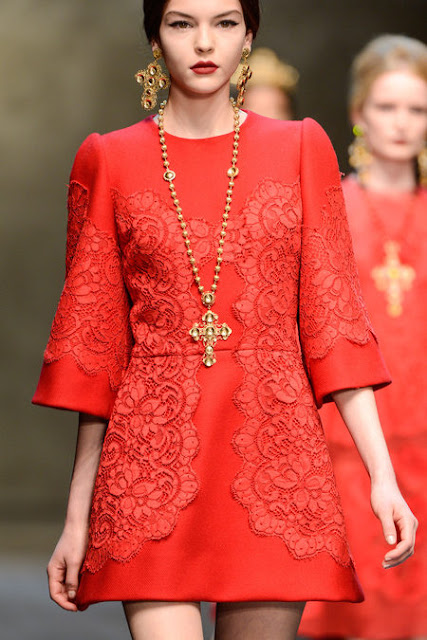 The only real low point was the interlude of ten grey tweed outfits in the middle of the show. Why were these outfits even there? They were certainly more traditional for Fall/Winter RTW styles, but the transition from the red and gold luxury of the Vatican to old-fashioned grey tweed seemed needlessly abrupt. 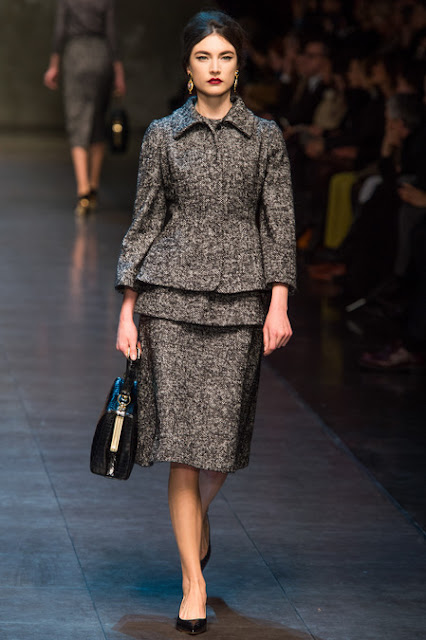 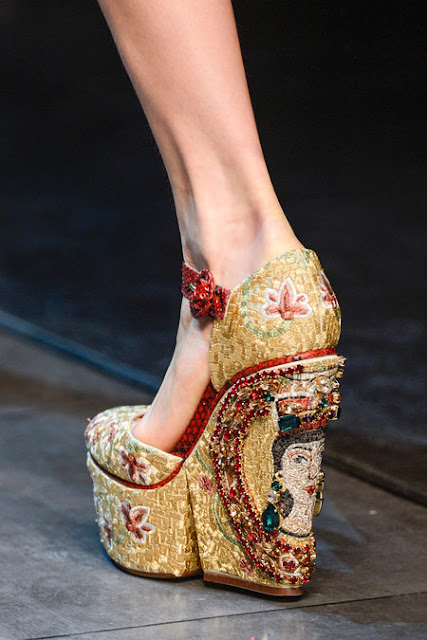 The shoes were a major highlight, with their intricate gold designs fitting perfectly with the theme. Rumour has it that the Pope's red shoes used to be manufactured by Prada -- perhaps D&G are angling for a Papal endorsement? 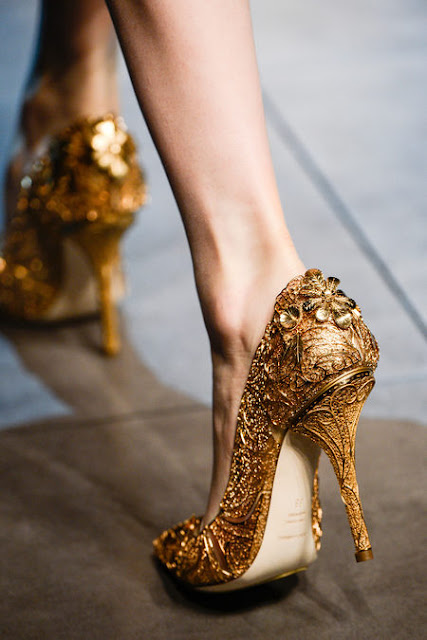 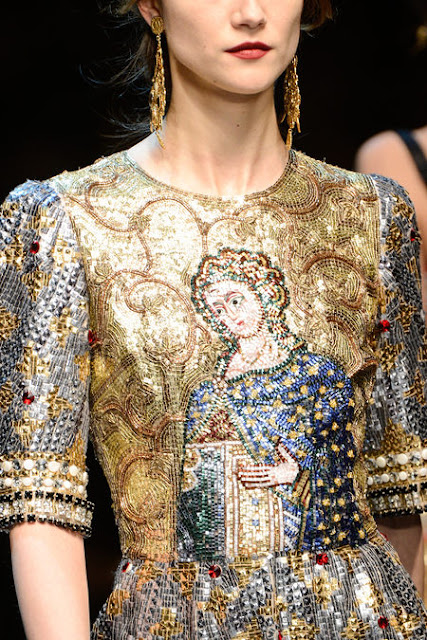 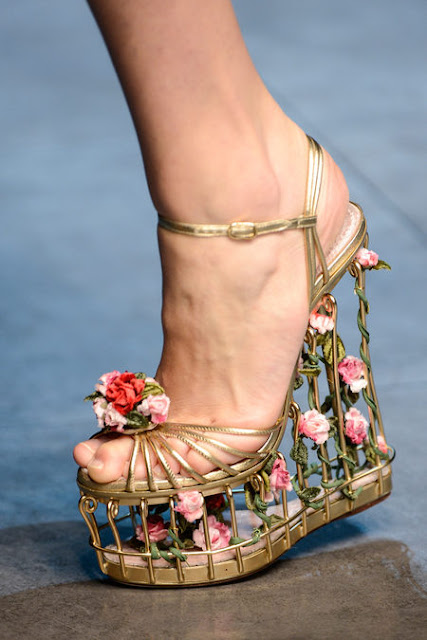